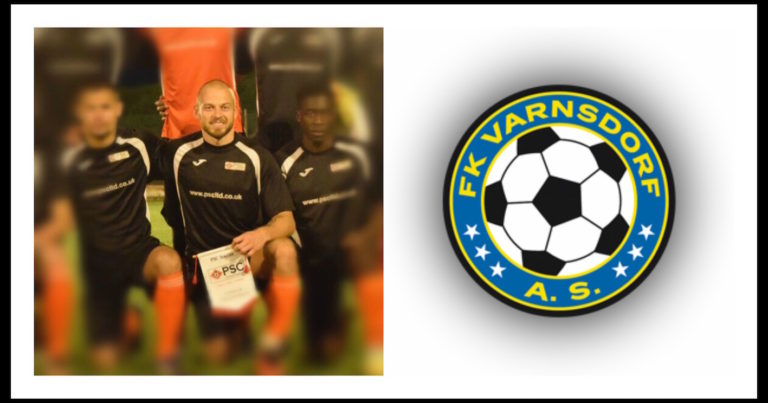 The 27-year-old full-back produced a number of standout performances during PSC’s Showcase Tour of Portugal and Spain in November and as a result earned trials with Varnsdorf last month.

After impressing both coaching staff and players during his trial period, Cennerazzo was offered a contract with the club and is now part of the squad’s preparations for the second half of their domestic campaign, beginning in March.

Following the news he would be putting pen to paper on a contract with Varnsdorf, the defender expressed his delight when we caught up with him to talk about the prospect.

“I’m so happy to have signed a contract – it shows how much the coach believes in me,” he said.

“Going on trial is not easy, especially in a foreign country with the communication difficulties that occur, but you just have to believe in your talent and work hard – I truly believe that I can flourish here,” he continued.

Varnsdorf’s addition of Cennerazzo to their squad means the Scotsman has signed with three different professional clubs following each of the three PSC Showcase Tours he has attended. And PSC Director Tom Taylor expressed his pleasure in seeing the left-back sign yet another professional contract.

“The level of play in the Czech Republic is very high and it will be an excellent test for him. I’m sure he’s going to enjoy playing at this level and it will be another great opportunity for him to experience a different country and style of play.

“He’s now played in Scotland, Sweden and the U.S.A., so I’m sure he will benefit from all of these experiences,” continued Taylor.

Furthermore, Cennerazzo spoke of the factors which have helped him settle with the club, including the sub-zero temperatures, similar to that of his native Scotland.

“It’s very cold and there’s lots of snow but the Czech Republic is beautiful; I train in shorts while all the other boys wrap up – a true Scotsman can handle that!,” joked Cennerazzo.

“The team have really made me feel welcome – the coaches and the players are all great.

“There is a very high level of professionalism here – training has been fantastic and intense – I have fitted right in,” he continued.

We wish Gary the very best of luck over in the Czech Republic during the next stage of his professional career.

If you would like to follow in the footsteps of Gary and start your own professional career, please e-mail info@pscltd.co.uk for more information on PSC’s programmes.