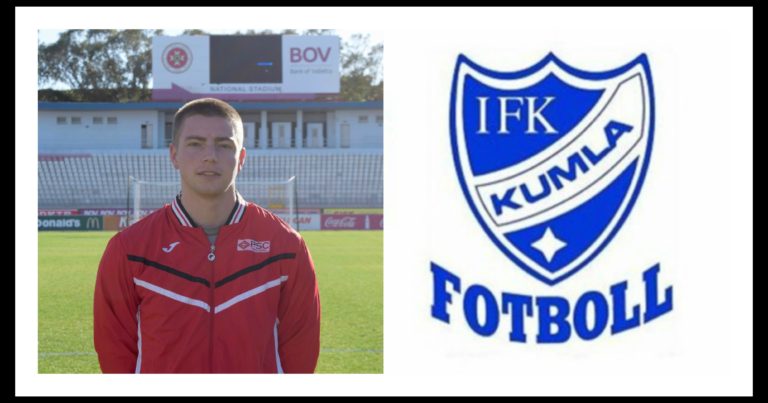 The 23-year-old caught the attention of PSC Coach Patrick Walker during our most recent Showcase Tour and was subsequently recommended to Kumla Head Coach Ted Waltersson-Larsson, who welcomed the central defender into the club’s first-team training session yesterday.

And Weber, a former Nebraska Wesleyan University player, spoke of his experience in Sweden with Kumla thus far.

“Both the staff and players have welcomed me in and treated me very well,” he said.

“They have a young and talented team – training with them has been a great experience for me and I am grateful for the opportunity,” continued Weber.

An ever-present supplier of knowledge and motivation to players throughout PSC’s Showcase Tour in Malta was PSC Coach Walker, who revealed just why Weber was an individual he was more than happy to recommend to Waltersson-Larsson.

“Will dealt very well with both the high number of games and high level of competition he faced throughout the tour,” said Walker.

“Each day he showed a great attitude both on and off the field, conducting himself in a professional manner at all times.

“These are the types of qualities we look for in a player when considering a recommendation to a club and Will deserves the opportunity to prove his worth over in Sweden,” he continued.

PSC Director Tom Taylor was keen to point out the areas where Weber succeeded, speaking of the traits players need in order to progress, both during and after a tour.

“A crucial part of the Showcase Tours we run involves assessing the players’ mentality and professionalism during the tour, in addition to how they perform during the test games,” said Taylor.

“It helps us gauge what standard an individual can compete at. In Will’s case, both myself and Patrick believed Kumla would be a good place for him to trial.

“We’re hoping he will impress the coaches at Kumla, as the team play a number of pre-season games over the next week,” he continued.

And Weber highlighted the many benefits his recent trip to Europe with PSC has supplied him with, as he looks to progress as a footballer.

“The Malta Showcase Tour was a great experience,” he said.

“Getting to play against top European competition with a talented group of teammates and coaches has certainly helped me grow as a player.

“It’s also resulted in an opportunity for me to trial in Sweden, so I want to thank PSC for helping me reach this point,” concluded Weber.

All of the staff here at PSC wish Will the very best of luck during his trial period over in Sweden.