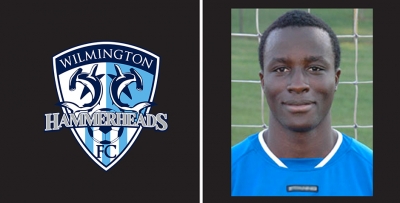 “I first saw Albert at a Pro Soccer Consulting Ltd. combine in Las Vegas back in December,” said Wilmington Hammerheads FC Head Coach David Irving. “I wanted to sign him to a contract right away, but he was drafted to MLS’s Colorado Rapids and soon after decided to finish his collegiate career at Lindsey Wilson College.”

Edward was drafted by Major League Soccer’s Colorado Rapids in the 2014 SuperDraft in January. He was the 69th overall selection, taken with the 11th pick in the fourth round concluding the Rapids’ draft.

He previously played for the Premier Development League’s Des Moines Menace, which advanced to the Third Round of the Lamar Hunt U.S. Open Cup before falling to MLS side Sporting KC. Edward was a key component in getting his Kentucky team to the 2013 NAIA National Championship. He started 57 of the 71 games in his four years of playing at Lindsey Wilson College.A native of Tanzania, Edward grew up in Brisbane, Gold Coast. He played youth soccer in Australia with the Brisbane Roar until he moved to the United States in 2010.

Coach Irving will be using PSC combines again this summer to recruit players for his USL outfit, our winter events have seen over 20 players sign or trial in Europe and America. Over the past 2 years Coach Irving has signed 12 players as well as offering trials to numerous more PSC Combine attendees.

Players wishing to be involved with any of our upcoming winter combines can find further detailed information here.