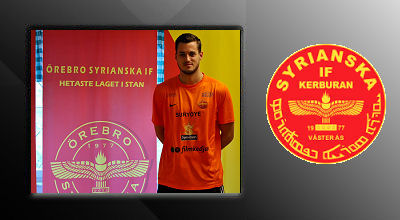 Following our exclusive interview with Sean Toth we caught up with Goalkeeper Alex Wimmer as both players were unveiled as PSC’s latest success stories earlier this week after signing with Orebro Syrianska IF in Sweden.

Wimmer was first seen by Agency staff at PSC’s 2014 Chicago combine last December and was invited on the January 2015 Showcase Tour to Ireland. In Ireland, the 6 foot 5 goalkeeper grew more and more impressive as the tour went on culminating in a banner game against Crumlin United where he made a number of big saves and displayed flawless distribution.

From this performance, and similar performances on PSC’s Sweden/Finland Showcase, the Philadelphia shot-stopper found himself on trial with IFK Lulea of Sweden’s First Division where he was unfortunate not to be signed. Following the trial PSC’s Residential Program Direcrtor, Patrick Walker, had been contacted by Orebro Syrianska looking for a goalkeeper. Having worked with Wimmer on both the Ireland and Sweden Showcase Walker had no hesitation sending him to the club who signed him immediately.

Wimmer played in college for Ohio State (NCAA D1) before spending a season with Southport in the English Conference. Our staff caught up with him earlier this week to get his views on signing his first professional contract.
Congratulations Alex, after spending the last month working with you in Ireland, Sweden and Finland its great to see that hard work pay off and help you sign your first pro contract. How does it feel?
I feel very enthused and excited about signing my first pro contract in Sweden. It has been something that I’ve been working very hard towards, and in the end it’s paid off. However, this is just the beginning. There’s still a lot of work left to be done.

Absolutely! You’ve played competitively in both America and in England so far in your short career. What is it now about playing in Sweden that you are looking forward to?

What attracts me the most about playing in Sweden is the opportunity to play a lot of games throughout the season and develop as goalkeeper. The environment and culture is also attractive. Moreover, the style of football played here is also inviting. It’s very technical which will help improve me in other areas besides goalkeeping attributes.

Great stuff, our Agency Staff actually think you can push on from this and we’ll see you at a much higher level in years to come! So in the end, this opportunity came about through PSC’s contacts and recommendations after you had proven yourself capable at this level. How did you first come into contact with PSC and set this journey in motion?
I first came into contact with PSC when I went to the Chicago pro combines. I had been struggling to find a club in between seasons last year and with the help of my father I was able to discover this opportunity. I chose the PSC Chicago combine as they legitimately gave me an opportunity, whereas I feel that other similar agencies are just in it for the money.

What were your thoughts on the combine in Chicago? And also the tours you subsequently attended?
The combines were a good way to be seen by the PSC staff to be invited on tour. The tour is what really opened the door for me. I was originally invited to go on tour with PSC in Ireland, and I had played well but didn’t get any offers from any clubs. However, PSC (specifically Patrick Walker and Paul Taylor) really thought highly of me and invited me to go on tour with them in Sweden, and this is how I’ve ended up here.

Do you have any advice for any other players who might be in the position you were in during October when you were looking for a club?
There are many things one could tell players aspiring to become a professional. However, I think the most important thing is to believe in yourself. The mental side of the game is so big these days. You can have all the talent in the world, but without the self-belief none of it is possible. I would recommend PSC’s events to players looking to seen by professional coaches. As a goalkeeper I’d specifically recommend this to other goalkeepers pursuing a professional career. It really has opened many opportunities for me.

And finally is there anyone you would like to thank publicly for their efforts/support etc in getting you to where you are now?

There are too many people to thank for their efforts and support in getting me to where I am now. But, most importantly there are three people that have been there with me for every step of the way. My family, my girlfriend, and my goalkeeper trainer in the UK were the ones that believed that I could do it. There have been a lot of ups and downs getting to this point, but without them none of this would be possible.

Thanks for taking the time to speak to us Alex, enjoy Sweden this year – we’re looking forward to seeing how you progress!