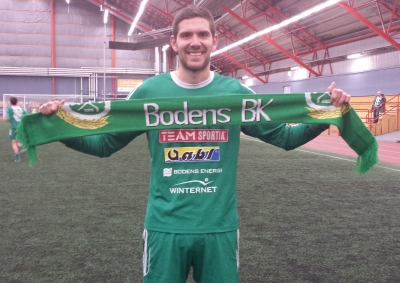 Andrew Lorei is a former NASL, USL and PASL player from the United States who has recently signed his first European contract with Bodens BK of the Swedish 2nd Divison following a PSC showcase event. In his blog he writes about life in Sweden for him and his team-mates Gino Mauro (Canadian) and Eddy Prugh (American) as they settle into a new culture both on and off the field. All three players were placed with Bodens as a result of PSC showcase events

“It finally is here…at least almost. After two and a half months of hard work my first game for Bodens Bk is this Saturday vs. Harnosands FF. I can honestly say that one year ago I thought there was no chance I would be playing in this game.
After playing five years of professional soccer at various levels (NASL, USL 1, USL 2, PDL, NPSL, and PASL) in the United Sates I was worn out. I had enjoyed my time without every really settling in or playing my best. I decided it was time to get “serious” so I started coaching full time. I enjoyed coaching but after 7 or 8 months I was really starting to miss playing. At which point I was contacted by Tom Taylor of Pro Soccer Consulting and I happened to look at their most recent offering one sunny afternoon. It was a 10 day Soccer tour of Malaysia and they were looking for guys. I was excited… Malaysia’s minimum salaries are around 6,000 USD a month plus room board and transportation. Not only that, but the Malaysian Super league is known for drawing huge crowds. My time in US soccer had been a good experience but this sounded almost too good to be true. I was 24 and rapidly approaching 25, I knew it was time to take one last leap before the grays started to set in. The next day I called my best friend and former teammate Gino Mauro. Gino was a top player and a former U20 Canadian international but was currently without a club. It didn’t take much to convince him to go.

Forty days later we were leaving Los Angeles International Airport to head to Malaysia!! I don’t have enough space to write about how exciting it was to fly half way across the world and play four games against teams from the Malaysian and Singaporean professional league as well as take on the U23 Malaysian National team – all the while staying in a 5 star resort in downtown Kuala Lumpur! Suffice to say that I had an absolutely brilliant time. The one disappointment was the Gino and I despite drawing interest did not receive a formal contract offer. However the PSC staff sat down with both of us individually and offered to help set us up with a Club in Sweden as they believed in our ability to play professionally.

Fast forward 3 months and Gino and I both ended up touring with PSC again but this time in the North of Sweden – a slight climate change to Malaysia! This tour resulted in both of us signing with Bodens BK in the Swedish 2nd division. We went from America to a tiny town in Northern Sweden (Bodens) via Malaysia…..the professional soccer life is not for the unadventurous. We were placed together in an apartment with another PSC recruit named Eddy Prugh. Eddy had recently signed with Bodens via PSC’s Las Vegas combine in December 2013 where Christian Samuelsson signed him for the 2014 season.

We have settled in fast. Gino has already fallen off a snowmobile (extremely popular recreational activity here) during an excursion with one of our new friends. The Spanish teacher at the local middle school quit her job and Eddy who happens to speak fluent Spanish is now a part time Spanish teacher in Sweden – despite not speaking Swedish! Evidently not a whole lot of Swedish people speak Spanish. Small towns present unique opportunities and I expect I will have lots more to write about on our day to day adventures in future posts.

Today we leave to play Harnosands. Since it is a promotion and relegation system, unlike the United Sates, every game is huge. Bodens BK has spent a lot of time in the first division and following last year’s strong finish are looking for promotion this year. Gino, Eddy, and I would really like to help the club get back there…….and can’t wait to get on the field this week!”

Good luck to Andy and the rest of our PSC Agency players in Sweden this weekend; Gino Mauro, Gustavo Villalobos, Eddy Prugh, Zac Lubin, Kevin Garcia, Alex Horwath and Dom Furness. Many of whom are making their professional, or European debuts this weekend.