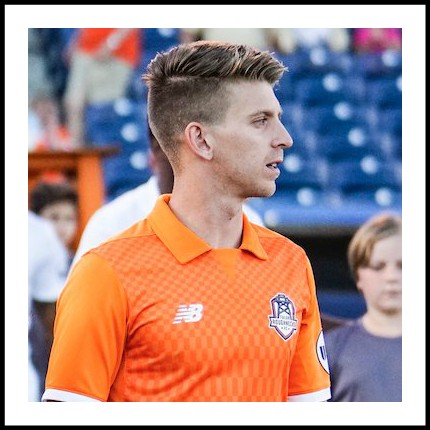 Nerves jangled, heartbeats were rising, sweat was dripping – the moment to impress had arrived. Brady Ballew stepped onto the pitch, ready to prove himself in front of the professional coaches at PSC’s 2014 Las Vegas Pro Soccer Combine.

The Seattle University graduate is now in his third season as a professional soccer player with USL outfit Tulsa Roughnecks. And so it turned out that his decision to attend PSC’s tryout event in Vegas was a life-changing one – as the then Roughnecks Head Coach, David Irving, offered Ballew the chance to join the Oklahoma-based club. 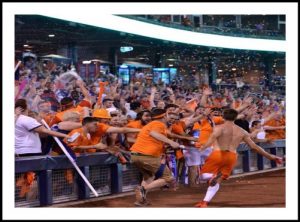 Happy: Ballew celebrates with Roughnecks supporters after getting his name on the scoresheet.

The 24-year-old midfielder has never looked back, firmly establishing himself as a fan favourite, and adopting the complimentary nickname ‘Saint Brady’ from the Tulsa faithful. He enjoyed a dream debut season with the club, beginning in the perfect manner, as he netted the Roughnecks’ first-ever USL goal against local rivals Oklahoma City Energy on the opening day of the 2015 campaign. His impressive performances continued, and come the end of the season Ballew was nominated for the USL’s Young Player of the Year Award – subsequently attracting interest from a number of clubs at a higher level.

The following campaign saw the Roughnecks suffer a number of defeats as they searched for consistency in an ever-competitive league. This year, however, has seen a change in both form and fortune for the club, and the outlook looks bright following an impressive start to the season. We recently caught up with Ballew to get his thoughts on life as a professional and much more.

Hi, Brady. How have you found this season so far?

It’s been great. Last weekend was my first start of the season and I was able to contribute with two assists. It was a good weekend for the team, and with it being my first start of 2017, I wanted to make an impact. I’m really happy to be a part of the team’s success.

This is your third season as a pro – do you feel you’re developing as a player?

I think this past year I’ve had to develop mentally as opposed to physically or technically. I feel like I’m progressing well, though.

You were spotted at PSC’s Las Vegas tryout event in 2014 – what made you attend this event?

I was looking for a way to get exposure at the next level, and heard of the event in Vegas. PSC’s combines are a great platform, not only for getting spotted by coaches who work at the next level, but also earning professional contracts. 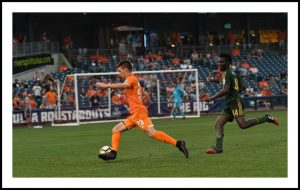 Under Control: Ballew makes his way past an opponent during Tulsa’s 3-1 victory over Portland Timbers 2. Photo credit: Tulsa Roughnecks FC.

How have PSC helped your professional football career progress?

PSC opened a door for me. Not every collegiate player gets a chance to reach the next level. They [PSC] were a great resource in finding a team and then helping me put pen to paper on a contract.

How is life in Tulsa and how does it differ to Seattle?

Tulsa runs at a much slower pace than Seattle, but I really do enjoy the lifestyle here. It has warm weather, friendly people and a is great little city that is very welcoming.

What do you believe are the main differences from being a college player to a full-time professional in the USL?

Every player on the [Tulsa] team has something about them. The coaches have brought them in for a reason and the players are willing to grind it out in practice everyday. I love the competitive nature and the standard at which we train. The USL is growing and it’s been great to be a part of it for the last three years.

What are your thoughts on Tulsa – both as an area and as a club?

Tulsa is a diamond in the rough. It’s in the middle of the country but there are people from all over the world that choose to stay and live here. Our fan group, the Roustabouts, is a great asset to the Tulsa organisation. The club is run in a very professional manner and is always looking to make strides to improve the player and fan experience. 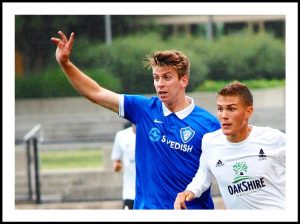 What are the ambitions for both yourself and the Roughnecks this season?

This year we have another great group of talented players and we want to make it to the playoffs, because at that point anything can happen. Personally, I want to continue to contribute on a regular basis and do whatever it takes to help the team win games.

Thank you for your time, Brady. We look forward to catching up with your progress when you head out to California this summer to play the Galaxy and Orange County. Good luck for the rest of the season!

Thank you. I hope to see you all soon!