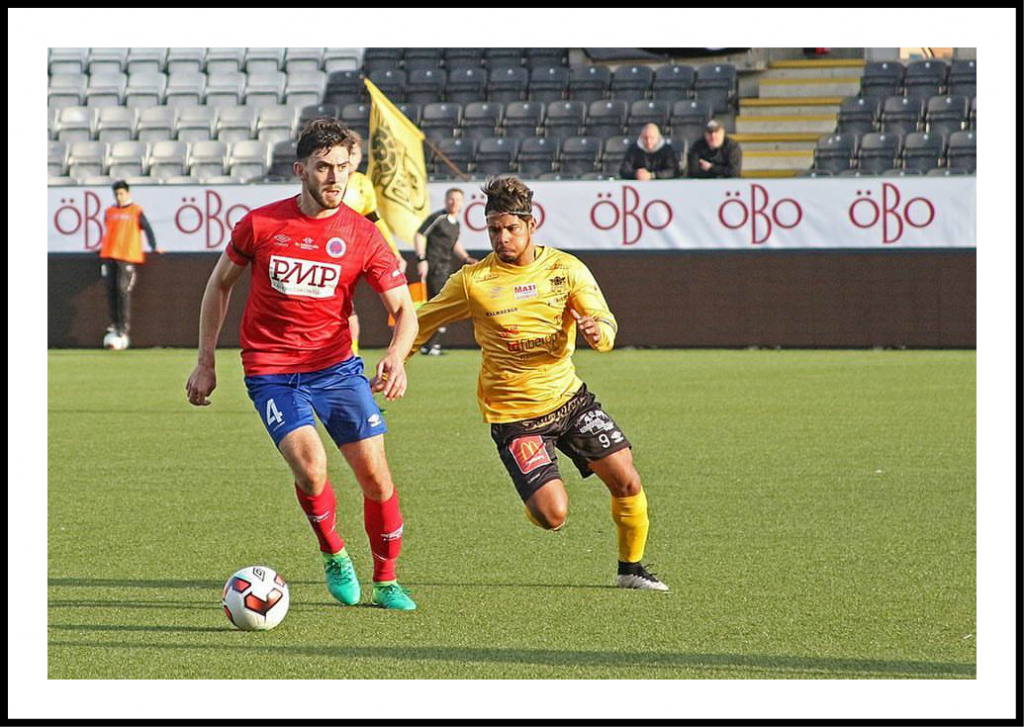 An unexpected phone call from PSC turned out to be a life-changing moment for your not-so-typical footballer, Laurie Bell.

At the age of 18, after spending time as part of a number of professional academies in England, Laurie was told he was surplus to requirements by now English League One side Rochdale AFC.

It’s perhaps an all-too-familiar story for some: a promising young footballer very quickly facing the harsh realities of a cut-throat industry. But that’s where Laurie’s journey toward becoming a professional took flight, in more ways than one.

The former University of Milwaukee player is now plying his trade as a professional footballer for Swedish Division 2 side Karlslunds IF HFK in the city of Örebro, while working as a freelance journalist for various national publications in the UK.

But that’s merely scratching the surface of the Englishman’s so-far unique footballing career – a career that over the past 18 months has seen him play the beautiful game in the USA, Sweden and his native England.

Eager to learn more about Laurie’s story, both past and present, we sat down with him earlier this week to talk about his footballing life in Sweden, the progression of Karlslunds’ three other PSC players, his widely-acclaimed football articles, and much more…

Hi, Laurie. How is life in Sweden treating you?

It’s great! I’m really settled here. It’s my second year living in the beautiful city of Örebro and I’m happy to be back. Football went well for me here last season, and I made a lot of friends. My club, Karlslunds, offered me a good deal to return so here I am, very excited for the 2017 season. 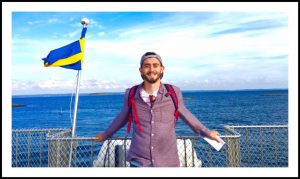 Like home: Laurie has settled into life in Sweden both on and off the pitch.

What brought you to Karlslunds?

I’m English, but I was playing for Tulsa Roughnecks in the USA a couple of years ago, where Tom Taylor [PSC Director] was my assistant coach. When I returned to Europe, I knew he had a lot of connections over here so I asked if he could help me find a new club.

While I was playing semi-pro in England, Tom called out of the blue and told me to get on a flight to Sweden immediately. Karlslunds needed a central midfielder and their season was about to begin. They took a chance on me and I took a chance on Sweden, packing my bags and flying away. Thankfully, it worked out great for everyone – with last season being one of the best and most enjoyable of my career.

Brilliant. We’re a talented squad and we have two young, hard-working coaches.

I played in England during the recent Swedish off-season and missed the coldest months of the Scandinavian winter. It was still a bit chilly when I got back, but we soon heated up on a pre-season training camp to Barcelona. We worked on tactics and trained hard, but more than anything it was an important team-building week. We have a great set of lads – a core of local boys with four foreigners blended in. In Spain we were all living in each others’ pockets – we could hang out by the pool during downtime and the new signings entertained us with a pretty high-quality talent show! We became a really, really tight-knit unit, which will stand us in good stead. A splash of Spanish sunshine felt good and got us ready for the season. 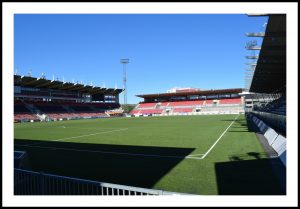 Karlslunds played their season opener at the Behrn Arena – home of Allsvenskan side Örebro SK.

Karlslunds’ first game of the season was just last week – how did it go?

It wasn’t the result we wanted, but it was a top occasion. Playing in a 15,000-seater stadium against a rival club from our city made for a good atmosphere. As a team, we did a lot of things right but we conceded a dubious penalty and couldn’t force any of our own chances into their net. Still, our performance proved that the seeds of success have been planted and hopefully they’ll flower into something beautiful this season. Our target is a sustained promotion push.

You made an immediate impact last year with your goalscoring form – do you have any more targets for this season?

It would appear that I remembered to pack my goalscoring boots in that last-minute suitcase to Sweden! I netted 11 last year and I’d love to do the same or better this season. But I’m a versatile centre midfielder, who can play in attacking or deeper roles, so I’ll do whichever job my coaches ask of me.

My personal target is to play at a higher level next season. This could be achieved by winning promotion with Karlslunds or by getting a move to one of the top divisions in Sweden or elsewhere. I’ve learned football is unpredictable, though, so my mind is firmly concentrated on this season for now.

The staff here are supportive of players’ personal ambitions so I just hope we can achieve big things together while I’m here. We’re a small club with about six full-time staff who all work so very hard. If we can help repay all of that hard work, it’ll be a special year.

Karlslunds has many players from PSC programs on their roster – how are the other guys progressing? (Ian McDonald Wilkins, Steffan Kraus and Zak Eppelette).

Really well. When you come from abroad into a new side you have to prove you are a good teammate. All of the international guys at Karlslunds are good professionals and have won over the local lads with a great attitude. I know this because a lot of the Swedish guys are now good mates of ours.

Zak Eppelette was here with me last year – the Canadian is a great defender who is set to dominate every striker in this league. Behind him, in goal, is my new German roommate Steffen Kraus – a former All-American with gloves of glue. He’s new but he’s made a big impression already and I’m very confident having him between the sticks – he’s truly the Manuel Neuer of the Swedish Division 2. And pushing him for a starting spot is Ian McDonald-Wilkins, another talented shot-stopper and a very hard worker. We’re spoiled for choice in that position, like we are in many departments this year. We’re all happy to be here, and I hope the Swedes agree that the foreigners contribute to the upbeat atmosphere around the club! 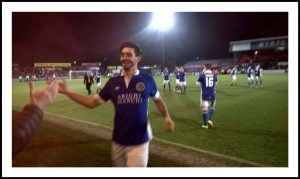 You returned home at the end of last year to play in England, what was your experience like while playing on home soil again?

I got permission from Karlslunds to go home and play over the winter, which is something I would recommend to any players who sign in Scandinavia, where seasons are relatively short. I signed on temporary terms for Macclesfield Town, with whom I trained every morning and competed for a place on matchdays. The National League is of a very high standard these days and I was proud to make a few appearances for the Silkmen, a local club of mine. I was also playing for Hyde United, another really well-run semi-pro side. When I didn’t play for Macclesfield, I played for Hyde. We went on a great run at Hyde – surging up the table away from relegation danger, transforming into play-off hopefuls. I had tempting offers to stay in England, and it was a little bittersweet to leave, but I was in constant touch with Karlslunds and excited to start a new season and continue the project we’re building here. So here I am. 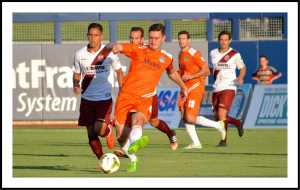 You have played in England, the USA and Sweden. Which is your favourite country?

England for the football, Sweden for the Fika (coffee with pastries, cookies or pie), and the USA for the beaches.

A number of your football articles went viral on the internet, tell us more about them and how you ended up writing for a number of national publications and websites…

I do some extra work freelance writing, and I wanted to write about how brilliant playing football abroad can be. More British players go abroad than you might think, but we don’t export big numbers of footballers, which I think is a bit of a shame. Seeing new cultures improves you as a footballer and you get a fantastic life experience as part of the package. So, if I can help inspire lads to dream of playing abroad or educate them on what’s involved, I’ll be happy. Additionally, it seems like it’s a subject people want to read about because I’ve had a lot of warm and interested responses. Take a read and get in touch on Twitter with any questions for me: @LBellBell.

Örebro has a grand, old castle which one day I will rule.

Good to see you have big ambitions, Laurie! It’s been a pleasure catching up with you – good luck this season!

If you would like to follow in the footsteps of Laurie and start your own professional career in Europe, please e-mail info@pscltd.co.uk for more information on PSC’s programmes. Our summer Pro Soccer Combines will take place in New Jersey, Florida, California and Texas this summer – where clubs and our Agency staff will be looking for new talent ahead of the July transfer window.