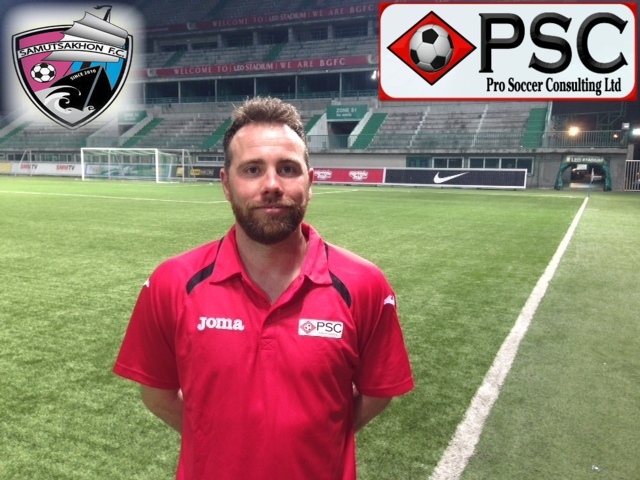 Pro Soccer Consulting is delighted to announce that Ben Everson has signed for professional Thai club Samut Sakhon FC, after impressing during the company’s recent showcase tour of the country.

Everson caught the eye of several suitors after scoring five goals in just four games out in Asia, and was spurred on by narrowly missing out on a signing in 2013, when PSC toured Malaysia and Singapore.

The 28-year-old forward was naturally delighted to reach his goals at the second attempt, and has described the move as “a great opportunity.”

Ben spoke exclusively to PSC after completing the move, and says he has achieved a life-long dream with the help of the tour.

“Playing in Asia is something I have wanted to do for several years now, and I’m really excited and relieved to have this opportunity, because I am aware of how difficult is to sign for a team in Asia,” he said. “I think it’s a great opportunity in terms of football to play at a good level in front of big crowds and hopefully do well financially, but also I am very excited at the thought of living in Asia as its probably going to be very different than anything I have experienced before.

“I heard about the tour to Thailand through Tom Taylor, as I had been in quite regular contact with Tom since I attended the Malaysia/Singapore tour in 2013. Tom recommended that this would be a good opportunity to play in front of Asian teams again for me so I jumped at the chance.”

During the tour, players were mentored by experienced coach Mark Miller. Everson says his guidance was vital to his success, and thanked PSC staff for their efforts.

“Having Mark coaching the team was great, straight away I could tell he had coached at a good level, and I really liked his philosophy of football and being positive on the ball,” he added. “I think he did a great job putting together a team in such a short time and that really helped the players to have good individual performances.

“The PSC staff were great with me, they really helped a lot to make sure I was in the best possible position to get signed, even after the PSC staff had left Thailand they were still in constant contact and really helpful. Mark Miller was also trying to arrange things in Malta for me if Thailand didn’t work out so I really appreciate all the help I was given by all the staff.”

Asked about his first experience with PSC three years ago, when he was unlucky to miss out on a professional contract, Ben explained that having a never-say-die attitude helped him improve as a player.

“Well, I originally chose to do the PSC combine to Malaysia in 2013, because it seemed like a very legitimate opportunity to sign with a team in Asia,” he said. “With some other companies offering combines, I wasn’t really sure it would definitely lead to anything, but I was confident that if I did well enough then PSC would be able to help me get where I wanted to be. I would definitely recommend PSC to other footballers, they put me in a shop window that I wouldn’t have been able to have with out their help.

“In Singapore, I was really unlucky to not have got a contract and I was really frustrated that things hadn’t worked out for me there. I knew how good of an opportunity it was to play in Asia, so this really motivated me to give it another go, and I just had a lot of confidence that if I could play to a similar level that I did in Singapore then I would have a chance that something could happen in Thailand for me. My advice to anyone hoping to break in to professional football is to accept that things won’t always be easy and go to plan but to just keep trying to make it. I have had lots of trials when I haven’t got signed and felt I was wrongly overlooked but I have managed to play professionally by not giving up.”

Ben’s attitude towards the process has been excellent, and everyone at PSC would like to wish him well, as our staff continue to help him in his journey as a professional player.