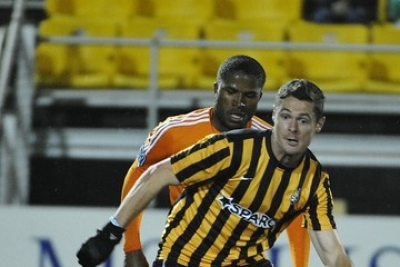 PSC are proud to announce their first combine success story of summer 2014 as San Diego Combine Participant Gibson Bardsley has signed for Kiruna FF in Sweden.

Bardsley, 24, had previously played with Dayton Dutch Lions in the USL Pro recording 14 goals in 45 games before signing with Orange County Blue Stars for the 2014 season. In July 2014 Bardsley fell out of favor with the USL Pro outfit and was quickly invited to attended PSC’s combine in Carlsbad, California where he played in front of coaches from Sweden and Finland as well as PSC agency staff.

Coach Lars Svensson who was attending the combine on behalf of IFK Lulea in Sweden as well as other Northern Scandinavian clubs was impressed enough with the center forward to recommend him to Kiruna FF. Bardsley accepted the contract offered to him and flew out immediately to join his new European team-mates before claiming a goal and an assist on his European debut. He has now scored five goals for the club lifting them to second place in the league and has already started to attract interest from bigger clubs in the Swedish First Division.

“At the combine in San Diego there was definitely 3-4 players that had outstanding performances and Gibson was a player that showed very well to the attending coaches and agents. We had heard good reviews from some of the coaches in the USL Pro league about Gibson but it was important for us to assess his mentality and attitude towards the game as well as his talent during the combine” said PSC Director Tom Taylor. “We have seen many good players in the past attend our events but one very important things for us when recommending players to clubs is knowing that they will represent you in the correct way. Gibson has definitely done this already and is proving to be a real success for the club.”

Kiruna FF play in Division 3 Norra Norrland and have a good reputation for fostering young talent and progressing them into higher leagues. Par Asp and Jonas Lantto who both now play in Sweden’s top tier (Allsvenskan) began their careers with Kiruna FF.

Bardsley is the first success story this summer as PSC continue to work behind the scenes and will be announcing many more success stories in the coming weeks ahead of their six professional soccer combines this winter. You can see all our success stories and combine information at the links below: