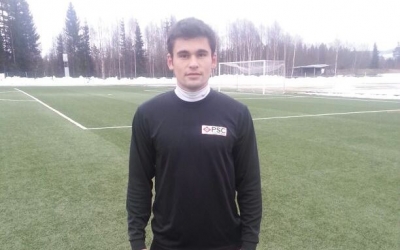 PSC are proud to announce their fourth success story to come from their 2014 January Showcase Tour to Lulea and Stockholm as Gus Villalobos has signed with IF Ange of the Swedish 2nd Division after he impressed coaches during a week long trial with the club.

PSC’s Stockholm leg of the January showcase was held at Boson, Sweden’s National Training Complex owned by the Swedish Confederation. The center was designed in conjunction with the Swedish Olympic Committee as a performance an education center and regularly holds coaching courses for all sports. PSC’s showcase team played two fixtures in front of 18 attending coaches and teams at the Boson complex during the tour, where IF Ange Head Coach Benny Matsson was involved with one of their educational courses and heard about PSC and their touring players.

PSC had completed their final game before Matsson was able to contact PSC staff but that didn’t stop him asking Agency staff if they could recommend to him an attacking midfielder from the tour. With 2 goals and 2 assists from the tour Agency staff immediately sent Gus Villalobos’s resume and highlights across to Ange who invited him on a week-long trial. Villalobos made an instant impression with the Divison 2 club who have tied down the ex CSU Northridge attacker for the 2014 season.

Villalobos is a popular character amongst the PSC team having attended two previous showcases where he has been extremely unfortunate to have not signed professionally sooner. Based on his performances at combines and tours in 2013 Agency staff encouraged Villalobos to keep persevering as they knew without doubt that the 23 year old was capable of playing at the professional level.

Villalobos took part in two PSC showcase tours in 2013 to Turkey and to Sweden where he was desperately unlucky not to sign or trial professionally after scoring four times on the Sweden tour alone (Video highlights –http://youtu.be/6Fiut0omFCo). He proved his desire and commitment to making it professionally by attending a third showcase in January 2014 where he has earned a well-deserved contract in the Swedish 2nd Division.

His playing days began at Birmingham High in Van Nuys, CA where he broke all kinds of scoring records before playing for CSU Northridge Matadors. An unfortunate leg break saw him on the sidelines for 15 months before returning to FC Hasental, an NPSL outfit in South California well known for producing quality players.

After an impressive season for Hasental which included two goals to clinch their division title in June 2013 and goals in the US Open Cup against the Ventura County Fusion Villalobos will now join up with Ange IF who have gained promotion three times in the last eight years.

Our events have now seen over 80 players offered professional contracts or trials in the last 2 years. Please see our links below for further information.

To register, or get further information on any of our above events please complete a registration form by clicking here.