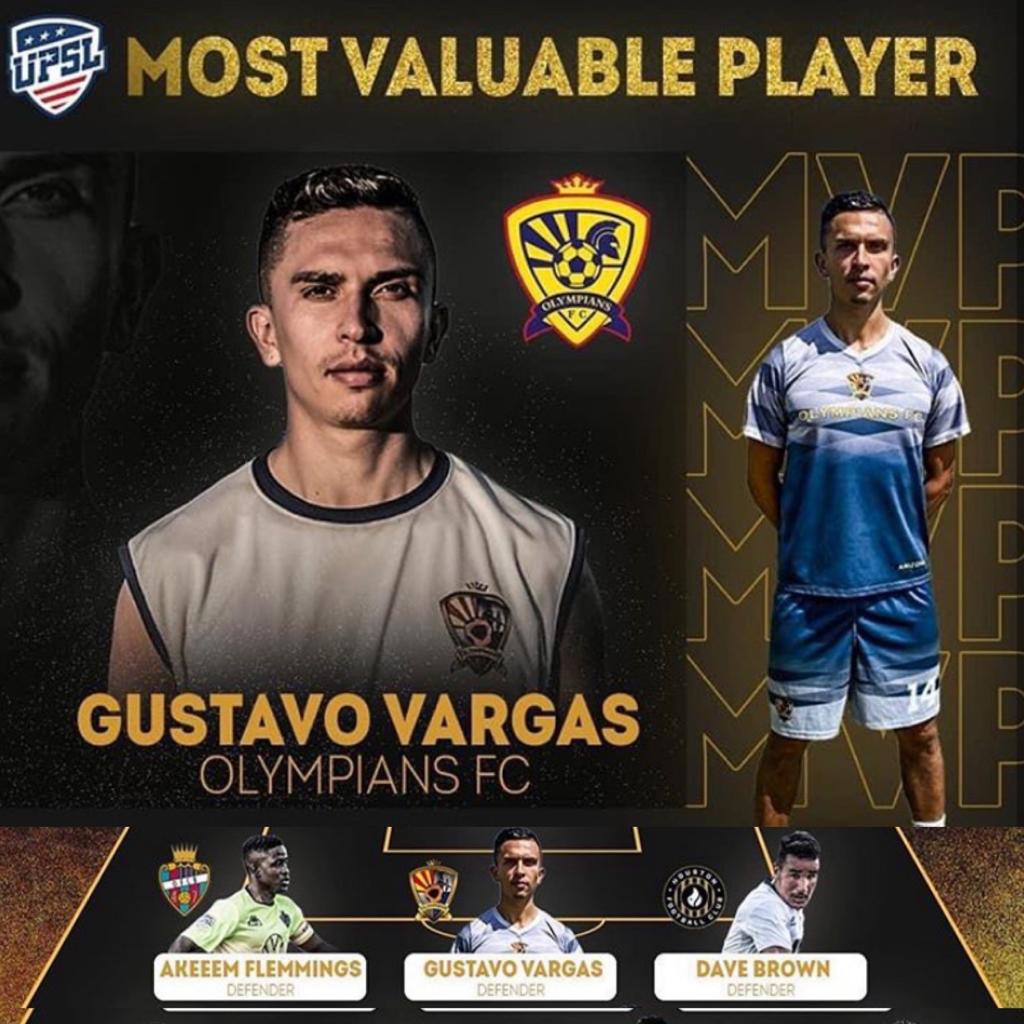 PSC are proud to announce that Houston Pro soccer tryout attendee, Gustavo Vargas, has been awarded the 2020 UPSL Most Valuable Player and also named in the UPSL Team of the season. Vargas spent his collegiate soccer career with Tulsa University and Oral Roberts University as well as playing in the NPSL for Tulsa Athletics.

The Colombian born Defender signed with FC Olympians back in May after impressing Coach Adrian Gaitan in January at PSC’s Pro Combine in Houston. When Coach Gaitan switched from his Head Coaching role at San Roque De Lepe in Spain to Head Coach of Olympians FC he instantly contacted PSC for his recruitment as he was aware of their reputation for high quality players. Since then he has recruited a number of key players from the Winter and Summer Pro Combines events including Vargas who has been a key figure in their defense.

Olympians FC is a full time football club based in Phoenix, Arizona. They are aiming to be the first crossover team in the USA to play in Mexico LG in 2021.

We recently caught up with Gustavo and he shared his thoughts about his move to Arizona and the process from the combine to full time football in Phoenix.

“First off I would like to thank PSC combine and Coach Adrian Gaitan for the opportunity they gave me and for making possible my involvement with the club, Olympians FC. I have been with the team for 3 months already, we play in the UPSL and we had a fantastic season.”

“Since day one I felt something special about this team and the work coach Adrian had in mind, we worked really hard on the field to the point where practices were harder than some of the games we played. This is a team with an enormous work ethic and team mindset. Personally my soccer style and skills have improved thanks to the daily work and the constant corrections the staff gave me. This team has a philosophy of high pressing, work ethic and team effort, every player is important to the system and the style we play.”

“Every time I step on the field with this team I feel confident in my teammates and the work we have to do. We all believe in the coach’s work and visualization, and I am excited for what is going to come for this team and group of players.”

“Thank you PSC for believing in me, and I hope this opportunity will guide me forward to the next step and play professional soccer in the near future.”

Vargas was not the only PSC player represented in the UPSL Team of the season as defender David Brown, also a Houston Tryout attendee was selected. Brown was placed professionally in the Maltese Premier League in 2019 and competed in the UPSL on his return.

PSC will be running 7 pro combines this winter in search for more talented players like Gustavo that are looking to take the next step in their game.

Check out our upcoming events