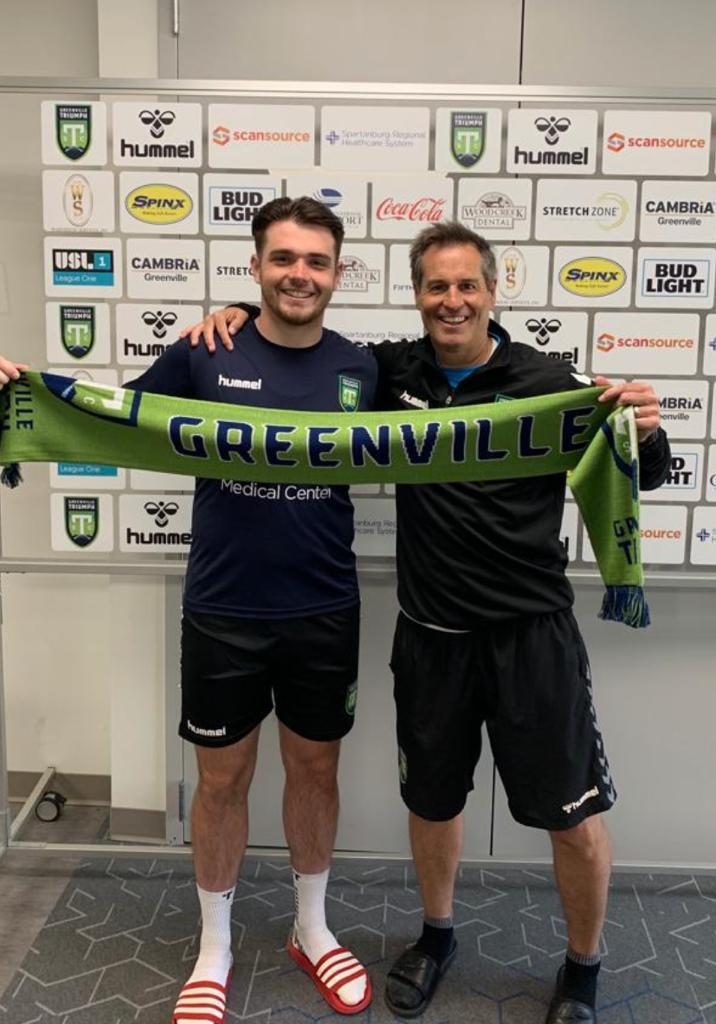 PSC are proud to announce the signing of Jamie Smith with Greenville Triumph in USL League One. The NC State and Limestone College graduate will join up with the North Carolina side for the 2022 League One season.

Having began his career in the tough system at Walsall, Jamie broke into non league football in England before opting to go the college route in USA. His performances in the college games led to a number of personal accolades and eventually a professional contract.

Jamie has family pedigree with professional soccer and with PSC Soccer as his Father Dean Smith (current Head Coach of Norwich City in the EPL) has worked with PSC for a number of years. It was this relationship which introduced Jamie to PSC services and has seen him sign in the USL for the 2022 season.

We caught up with Jamie ahead of his first pro season in the US:

Can you share with us briefly where you grew up (youth career) and then how you came to America and college experience?

I was born in Birmingham, England and my youth career was spent at Walsall FC. I was at the club for 6 years, after joining when I was 12 and played for the youth team during a 2 year scholar period. I was then released at the age of 18. The next season, I went on numerous trials to clubs in England, and signed a non-contract deal with non league side Sutton United, where I managed 1 appearance in the league and a few bench appearances in their great FA Cup run. I was loaned out to Hendon Town and gained valuable experience of playing mens football in the lower leagues.

However, at the end of that season I had discussions with my family and decided to go to the USA to continue playing and gain an undergraduate degree for the next 4 years. An assistant coach at Limestone University reached out and I decided to leave home and go and play somewhere I didn’t know too much about as the decision was so late, but I prepared for it the best I could and used it as another opportunity to try again.

I had two great years playing at the D2 level achieving team and personal success and accolades. After those two years, I transferred to NC State University. Playing for NC State in the ACC, which is the top level of college soccer in the USA was great. I wanted to reach the top level of college soccer in order to further my opportunities of playing professionally. After 3 years, which included an extra year due to COVID, I managed to graduate with an undergraduate degree and start my masters, which I’m still in the process of completing.

Playing in the ACC allowed me to gain more valuable experiences and get more recognition for good performances, which were broadcasted. After 83 games and over 7,000 minutes played in a 4/5 year period, playing in universities in the USA was an experience I do not regret. Quite frankly, the best decision I have ever made was going to the USA and restarting my career, on and off the field, meeting so many great people and learning so much along the way. All of this has helped guide me to where I am today and to achieve that professional dream, where I have signed a pro deal with Greenville Triumph.

What is it about playing in the USL that you are most looking forward to?

The USL offers many challenges that I am looking forward to. I watched a lot of games throughout the previous seasons to understand the level. I think the first thing I’m really looking forward to is just getting on the field and playing at the professional level, showing what I can do. There will be lots of great atmospheres and intense games throughout the season that will provide great challenges in a very competitive league that my team and I will look to overcome.

What are your hopes and goals for this season (both individually and as a team)?

For the team, the aim is for repeated success – 3 straight USL league 1 finals and 2020 winners, it is a club that has seen much success early on and as a team we want to continue that by striving to be better everyday on the training field. It will not be easy because other teams want to be in our position and we have to be at the top of our game everyday in order to achieve our goals, but with the group and the staff that we have, it is definitely achievable.

Personally, I want to have an impact on the field. It is my rookie season, but I think my past experiences will give me the opportunity to go out with no fear and perform on a daily basis. I hope to see a lot of game time and good performances. I set my personal levels quite high, and I want to hit the ground running quickly at a great club, which has seen so much success in a short time.

How has your experience been with Mark (PSC) and facilitating of the deal?

The experience with Mark has been excellent and he has supported me throughout the negotiation period. There was constant communication between us, in which I had little to worry about and could focus on my football on the field. It was swift and easy, which meant no stress for me as I trusted Mark and he massively helped me throughout. I can’t thank him enough.

Is there anyone you would like to thank or acknowledge at this time?

I want to thank my family, girlfriend and friends, who have supported me throughout this journey from afar. Without them and their constant support, I would not be where I am today. Obviously a huge thank you to all my college and summer league teams and coaches along the way (NC State, Limestone University and Asheville City SC) who helped me become a better player, to give me the opportunity in the USA and compete at the highest levels of college soccer. Lastly, to PSC for all the assistance in the deal, which has allowed me to join Greenville Triumph and the start of a great journey.

All here at PSC wish Jamie the best as he begins his pro career in USA. Want to follow in his footsteps and earn a contract in the USL? Attend one of our upcoming events.