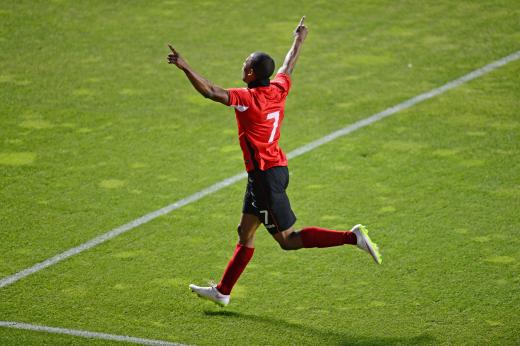 It’s the zero-to-hero story every aspiring player dreams of. Striving to have an impact at amateur level, enduring countless extra gym and training sessions, all the while hoping that the hard work will eventually pay off. For Jonathan Glenn, the man now making waves in the world of international soccer, his recent achievements are just the tip of the iceberg.

A goal and an assist for the Trinidad & Tobago national team in a 3-3 draw against Mexico last month was the latest in a series of successes for the striker, the first of which came in 2013, with the help of Pro Soccer Consulting.

A Saint Leo University graduate, Glenn had an impressive goal-scoring record at college level. Fourteen goals in as many games saw him named Freshman of the Year, before NSCAA honors followed in his second season. A glittering three-year run saw him rack up 41 goals in 57 games to become the fifth highest scorer in Saint Leo history. A good start, by anyone’s standards.

Further impressive displays for PDL club Vermont Voltage earned him a move to NPSL club Jacksonville United, a club with great links to PSC, in 2012. Glenn was no stranger to accolades by now; he would soon be included in the All-Conference team, but his new city had even more in store.

The center forward was seeking a bigger challenge, which was offered to him when Jacksonville United owner Barry Dixon was eager to get some of his talented squad in front of PSC Agency Staff and professional coaches with a view of moving them into the professional ranks. The event  was a success for PSC and his club, seeing 4 United players earn professional opportunities. Two with the Charleston Battery (USL Pro), another with Finnish Premier League side RoPS, and of course, Jonathan Glenn to Icelandic Premier League side IBV.

IBV were not in attendance at the event, but had contacted PSC looking for a striker and agency staff had no hesitation in recommending Glenn, who was signed following a trial. The Trinidadian accepted the opportunity with open arms, and in just two years went from amateur status in the NPSL, to scoring for his National team against a high profile Mexico side

Unsurprisingly, the 28-year-old has since gone from strength to strength, as agency staff continues to manage his playing career. His debut season brought yet more success, as he hit 12 goals to finish second in the league’s scoring charts, while helping his country to second place at the 2014 Caribbean Cup.

Glenn has made a similarly efficient start to this year’s campaign, and you certainly wouldn’t bet against this success story continuing to catch the eye…