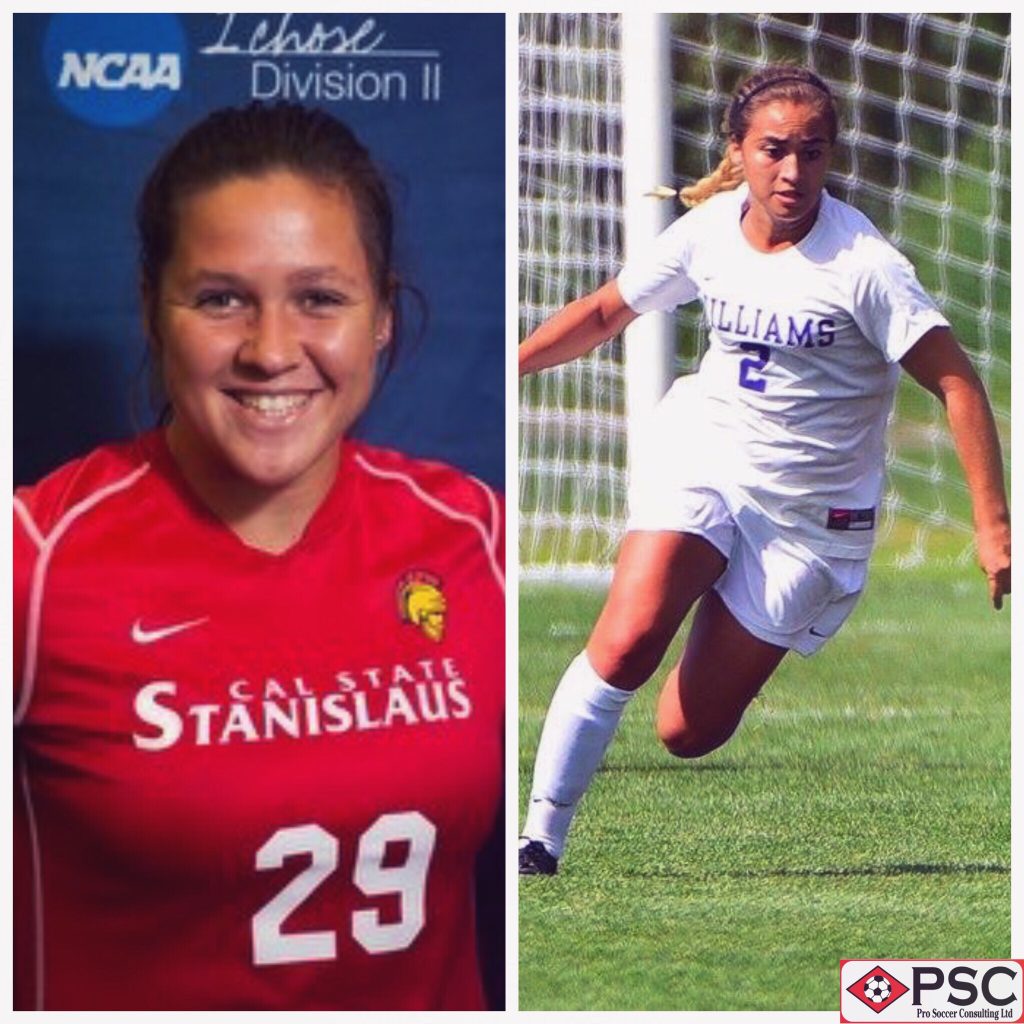 Both individuals attended PSC’s California tryout event back in December 2017 – proving their worth over the three days and earning recommendation to Sindri from PSC Director Simon Deeley.

Nebesnick and Lewin, both 24 years old, follow in the footsteps of Nicole Maher, who penned a deal with Sindri just last month.

Just like Maher, Nebesnick and Lewin are both serving out their first-ever professional soccer contracts – and earning that professional status is something the midfield duo admitted was a dream come true.

“Since the age of eight I set myself a goal to be playing professionally after I had finished college,” said Nebesnick.

“When I found out that UMF Sindri wanted to sign me, I was beyond excited that I had finally accomplished my goal. Now I’m looking forward to competing at the next level – not only during games but in training sessions, too. I’m also looking forward to experiencing a new culture.”

And Lewin revealed the overwhelming feeling that consumed her after learning of a contract offer from Sindri. She said: “I actually received the call from Simon [Deeley] while I was at work, and I couldn’t contain my excitement. It came at a time when my hope was starting to waver, so I can’t say there was just one single emotion.

“I’ve worked extremely hard for my entire life to be in the position I’m in now and it’s not an easy accomplishment for women in soccer, so I’m just extremely thankful that everything is falling into place.”

And like Nebesnick, Lewin also talked of the opportunities she’s most looking forward to, both on and off the pitch, during her time in Iceland.

“I can’t wait to improve myself as a person and a player,” said Lewin.

“There’s always more work to be done; you can always be more fit, more comfortable on the ball, more intelligent on the field.

Nebesnick and Lewin’s progress towards the professional game has been monitored by PSC staff in recent years, with combine feedback from attending coaches proving vital in both players’ development.

And Deeley, who has been a key figure in facilitating Nebesnick and Lewin’s deals in Iceland, revealed that the determination and hard work he had witnessed were key factors in his decision to recommend both individuals to Sindri.

“I’m especially delighted with both of these success stories, as they are both examples of great determination,” said Deeley.

“Katelyn [Nebesnick] was technically excellent during the 2016 Florida combine, but coaches wanted to see her improve on her fitness. I can see she has worked very hard over the past year to do just that, and has subsequently been rewarded with a professional contract.

“Earlier this year Katelyn was offered a contract with another club, but the deal fell through – she proved her character in this situation and reacted in a positive manner, when it would have been easy to show frustration and a negative reaction. Katelyn accepted the news and continued pushing for a new contract, which she now has.”

And when reflecting on Lewin’s deal, Deeley was equally full of praise for the former Williams College player. He said: “Crystal has attended multiple combines and proven to us that she is capable of playing professionally.

“We recommended her to clubs a couple of seasons ago, but due to college commitments she couldn’t complete a deal – so I was delighted when she decided to attend another of our combines late last year.

“She displayed the same qualities as she had on previous occasions, and was recommended and signed as a result,” concluded Deeley.

Indeed, Deeley’s words are testament to the fact that if an individual can demonstrate skill, hard work, determination and fitness during a PSC combine, opportunities will come in their direction.

And reflecting on their combine experience, both Nebesnick and Lewin revealed just how valuable PSC’s services can be to aspiring professionals.

“I would 100% recommend PSC to aspiring professionals,” said Lewin.

“It’s rare to be able to get exposed to experienced coaches and players all in one place, and there’s nothing quite like it.

“The best part about competing in the combines is getting to play in front of pro-level coaches, and being able to pick their brains about what it takes to play at that level. It’s also a great experience in meeting players from different situations with diverse goals.”

And Nebesnick echoed the thoughts of Lewin.

“If anyone asked me about PSC’s programmes, I would definitely recommend them because the exposure to coaches provides a great opportunity to get recruited,” said former California State University Stanislaus player, Nebesnick.

“The combines are held in a professional manner, and PSC’s staff and attending coaches tell the players exactly what they are looking for in participants.”

Vital preparations are now underway in the Sindri training camp ahead of the club’s first league fixture on May 12. And with three PSC success stories now part of the squad, Deeley expressed his gratitude to Sindri, and excitement in seeing how the girls progress during the forthcoming season.

“The club have been fantastic to work with: very transparent and easy to deal with,” said Deeley.

All of the staff here at PSC wish Katelyn, Crystal and Nicole the very best of luck ahead of their forthcoming season with UMF Sindri Höfn.

Would you like to follow in the footsteps of Katelyn, Crystal and Nicole and become a professional soccer player with the help of PSC? If so, please e-mail simon@pscltd.co.uk.