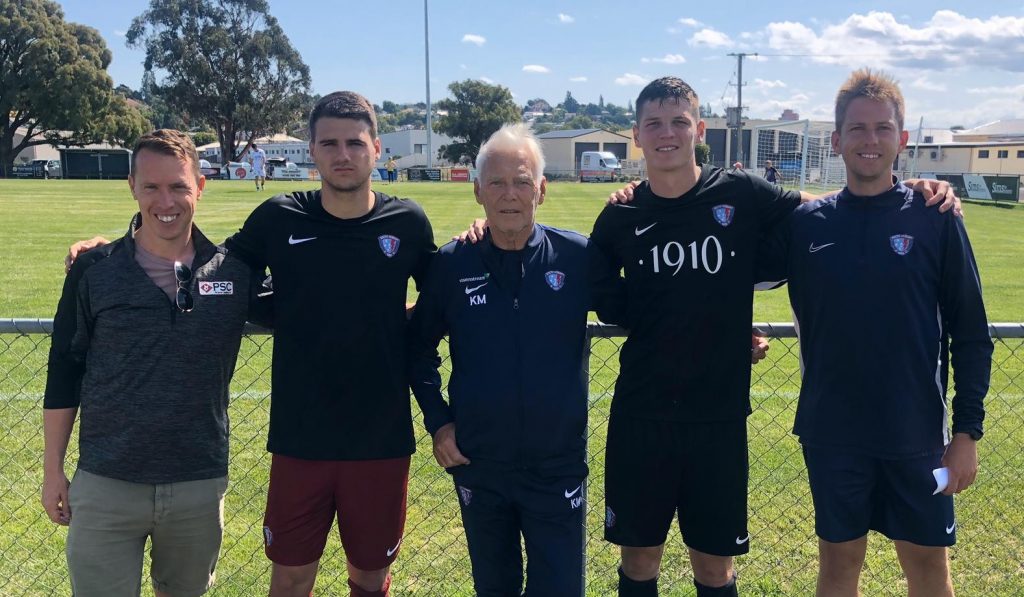 PSC are proud to announce Patrick Kibler has signed in Australia with South Hobart FC.

The 23-year-old is no stranger to PSC having first attended a PSC tryout in Richmond, Virginia in 2018. The central defender put in a number of impressive displays and stood out to PSC agency staff immediately. Kibler trialed in Malta and was recommended for a number of other opportunities without any immediate success.

Some players in this position in the past have given up, however Kibler proved his determination and commitment to the process by continuing to showcase at PSC tryouts, including our Malta and Sweden elite professional showcases, and force his way into the professional game. Now, eighteen months later, his persistence has been rewarded with his first professional contract down under.

PSC Director Simon Deeley, who traveled to Hobart for the Belmont Abbey graduates debut, made a point of praising his dedication to showcasing.

“Patrick stood out immediately in Richmond and was a player we felt we could place in the professional game. We all hoped it would come a little sooner, but Patrick is an inspiration to all players attending PSC events showing that things don’t always happen as planned, and results don’t always come immediately.”

He continued “we have worked with many players in similar situations to Patrick who will give up after attending one tryout and not seeing success within a week. Patrick is a perfect role model for these players who need to trust the process and understand that breaking into the professional game isn’t always easy – sometimes you have to show professional commitment and dedication to get to where you want to be”

He concluded “Simply put, if you want it enough, don’t give up!”

Patrick is joined at South Hobart Fc by Goalkeeper Chase Webert, who also signed this week. All here at PSC wish Patrick and Chase the very best as they look to begin long-lasting professional careers.

PSC have just announced another six tryouts across USA for June & July 2020, including Orlando. If you wish to follow in Patrick’s footsteps please check out our upcoming tryouts page, where we have a 25% discount until February 15th.