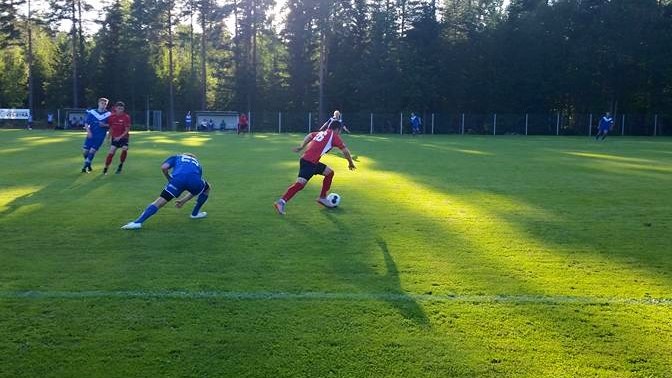 The 23-year-old attacking midfielder was invited to join the company’s tour of Sweden and Norway after being recommended by fellow PSC success story Chase Miller and, through sheer determination and hard work, achieved his goal of playing professional soccer abroad.

Martz soon stepped up to the challenge of facing professional opposition in Europe, scoring a stunning volley during the opening game of the tour at Orebro’s Behrn Arena, and in turn caught the eye of the various coaches and scouts in attendance. One of those watching from the sidelines was Mark Miller, who recommended him to Pembroke, advice which saw the player signed without trial. Miller was not just impressed with his goal-scoring ability, also his intense work rate which saw the player thwart a number of attacks during the tour. You can see highlights of his goal, and his work rate on his individual highlights page.

Though the Georgetown University graduate’s dreams came true after just one combine, his journey wasn’t always straightforward. Having been turned down following a trial with New York Red Bulls II before learning of PSC’s events, the contract signing is testament to Martz’s ‘never-say-die’ attitude. As he admits in his personal blog, the cold Swedish weather “wasn’t enough to freeze the fire inside me”; an inspiring thought for those hoping to follow in his footsteps.

The next chapter in Martz’s story will see him ply his trade in Malta, where his new club has just reached the highest level of soccer in the country for the first time in its 21-year history.

We caught up with the former Baltimore Bohemians man, who said it was the company’s previous success stories which convinced him to sign up for his first combine…

“Well, I feel like I’m on vacation! Never in my life would I have guessed that I’d be moving to an island in the middle of the Mediterranean Sea. I’m just full of joy. It’s a new experience, and a journey that has been extremely fun so far, so I couldn’t be happier about signing the contract.”

“Other than doing team swims in the Mediterranean? I think what excites me most is that the Premier League here is very competitive. There are a few teams with a lot of history but everyone battles. My team, Pembroke Athleta FC, just got promoted and there’s a lot of talk about how we won’t stay up. My teammates and I are excited to prove everyone wrong and we are happy about our new signings.”

“I knew that I wanted to play internationally and travel overseas. When I caught word of PSC and their combines through a buddy, Chase Miller, and knew his success story, I immediately punched my ticket to the combine. The tour was the next step that needed to be taken and I couldn’t turn down the opportunity.”

“The tour was like the Fabregas of the English Premier League for me. I felt that it was assisting me in one way or another almost every day! Whether it was playing against a good Swedish or Norwegian side, playing with guys who connected well on the field, or the unbelievable coaching staff, the tour was always helping me. The staff members were wise and experienced. Having all played and coached professionally, you can’t get better guidance than that, so I knew everything taught to us would be beneficial and in our best interests as players.”

“It’s nearly impossible to sum up what I learned from these coaches. From Patrick, I learned a lot about preparation and how to think as a footballer off the field. There are so many decisions that can impact the kind of player you are, and Patrick taught me the power of the mind. Paul knows the game as well as anyone I’ve worked with – I’ve never thought of the game being described in pairings (partnerships of two all over the field). Declan was an encourager, and always demanded a high standard at training. If our passes weren’t spot on, he’d push us until they were. And Mark just knew how to motivate a team, he knew when to get into you because of his belief in us as players.”

“We earned a corner kick in the early minutes of the second half against Karslund and I lined up at the top of the box. Kyle O’Brien, who is also in Malta with me, whipped in a nice ball just beyond the near post. It was cleared out to the top of the box. I hear Gary in his deep Scottish accent yelling ‘pass, pass, pass!’ However, in my mind, I already had the decision made that I was going to shoot. As the ball fell, I took one touch, let it bounce and hit it with the outside of my foot. Some believe it deflected, but the ball never lies, and it soared into the top corner. I felt so good that I pulled my shirt over my head and earned myself a yellow card!”

“The success stories. PSC has placed players at high levels all over the world, particularly in Scandinavia which is where I really wanted to play. After reading through success stories and talking to friends who had done it in the past, I knew it’d be the best choice for me, and it definitely turned out that way.”

“Absolutely! It’s worth the exposure and experience. You will come out a better player for it.”

“If you still love the game, but nothing is working out, do not give up. This past year I was ready to hang up the boots. The desire was still there, I wanted to be around soccer, but I just didn’t think playing professionally was an option anymore. Life has a funny way of changing course though, so keep working hard and don’t give up. The most important thing is to believe in yourself. Think of confidence as something you can always have, no matter how you’re playing.”

Finally, Is there anyone you would like to thank for their efforts/support etc in getting you to where you are now?

“Being a Christian, I’d first like to thank Jesus for always being by my side, and always providing a plan for me to excel. My parents for all of the support and love they continually pour into my life. My friends who have been behind me in every decision that I’ve made. Georgetown University for opening windows and opportunities for me, and developing me into a better player the past four years. Baltimore Bohemians for being the last club I played for and helping me reach this level. The Krahling Sports Agency for working so diligently with me and PSC over the past few months. And finally, I’d like to thank PSC – for every opportunity from the combine to the tour. Thank you for the coaching staff, the experience of traveling overseas and, most importantly, working so hard to help players achieve their dream. Thank you PSC for connecting me with Malta!”