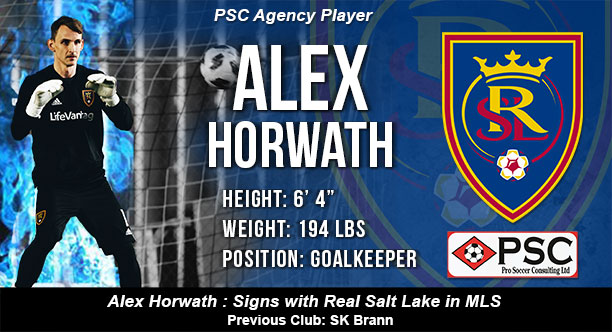 PSC would like to congratulate Alex Horwath on his recent signing in the MLS with Real Salt Lake. A longtime agency player, Horwath was initially discovered by PSC during his playing days in the USL with the Wilmington Hammerheads. He attended PSCs Florida Pro Combine back in 2013 and has since moved on to play around the world including time with VSI Tampa (USL), Ljungskile (Sweden), SK Brann (Norway) and has now returned back to the MLS where he first started his Pro career.

Real Salt Lake brings Horwath in for some much needed help at the goalkeeper position for which the lengthy American is no stranger to. Across his entire career, Horwath has posted an impressive 37 shutouts in 106 appearances.

PSC Company Director, Mark Taylor said “I’m delighted that Alex has gotten the opportunity to return to the MLS.” A number of MLS clubs showed an interest in him but he ultimately went with some familiar faces as both the Head Coach and Goalkeepers Coach at Real Salt Lake are coaches that Alex has worked with when he played with the NY Red Bulls. Alex is a true professional and has gained good experience in Sweden and Norway over the last four years. This is the right time for him to return to the MLS. Real Salt Lake has one of the best keepers in the league in US International Nick Rimando, but Alex will be pushing him all the way.”

Real Salt Lake General Manager Craig Waibel said “We are happy to bring Alex into our locker room. He’s another player that will help raise our level of training and keep a competitive environment. He has proven that he can compete in the U.S. and abroad and with his experience in Europe we feel like he brings a new element to our roster.”

All of us here at PSC wish you much success with your new club.

This article was written by Gary Plather, social media specialist working with PSC.