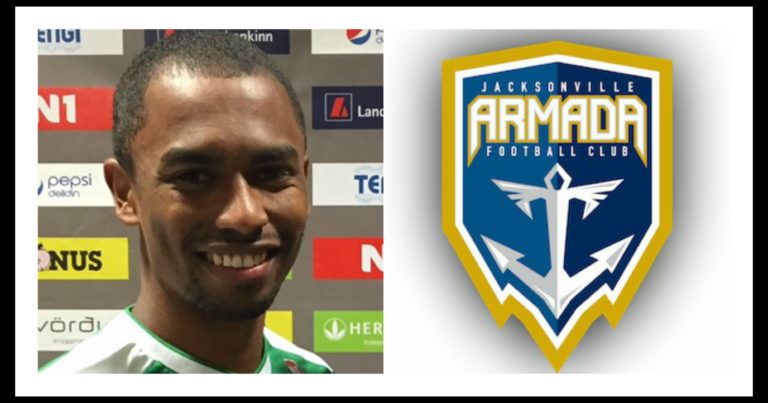 PSC Agency player and Combine attendee Jonathan Glenn has signed with Jacksonville Armada of the NASL.

The 29-year-old frontman joins Armada amid interest from a number of clubs around the United States.

Glenn’s latest transfer comes on the back of a three-season stint with Icelandic club IBV, inclusive of a loan deal with Breidablik, in the country’s top tier of football – a move that was orchestrated by PSC Agency staff following the Trinidadian’s standout performances during PSC’s Jacksonville Combine back in 2013.

Before attending the said tryout event, Glenn had netted 41 goals in 57 games for his Saint Leo University side. Standout performances for PDL club Vermont Voltage and NPSL outfit Jacksonville United (now Jacksonville Armada U23s) earned him a place in the All-Conference Team, and subsequently a recommendation to PSC from United’s owner Barry Dixon.

Glenn’s life-changing move across the Atlantic would prove to be more rewarding than he could have ever imagined. During his opening 2014 campaign with IBV, the centre-forward lit up Icelandic football, earning both the club’s Golden Boot and Player of the Year awards, after notching 12 goals, meaning he was the second-highest goalscorer in the league that season.

Next, a dream would come to life, as Glenn was offered the opportunity to represent his national team, earning a call-up to the Trinidad and Tobago National Squad. He helped the team reach the finals of the 2014 Caribbean Cup, and the following year put both a goal and an assist to his name during an international friendly against a top-quality Mexico side in Salt Lake City, Utah.

Now, as Glenn makes the move back to the city where his journey toward international footballing status began, it may be time to keep an eye out for a certain name making headlines this side of the Atlantic.