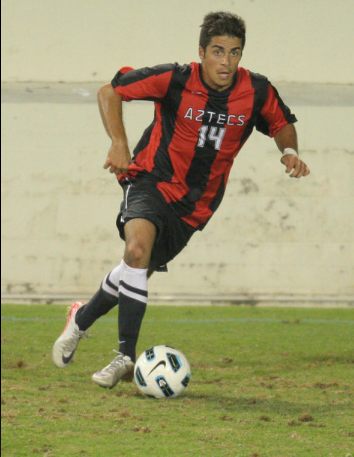 PSC are proud to announce their second combine success story from our 2015 summer events as Ata Ozbay signs in the Airtricity League of Ireland Division One with Finn Harps after impressing at both our San Diego and Arizona Combines.

Ata will be joining forces with PSC’s 2015 success story Wilfried Tagbo, who signed with the club earlier this year and has made a huge impact at the club both on and off the field in pushing them to the top of the table.

Head Coach Ollie Horgan traveled to PSC combines this summer in Fort Lauderdale and in Virginia in search of a number of positions as well as a striker to work up top with Wilfried. Although he was unable to attend PSC’s West Coast combines, he asked Agency Staff for any recommendations that could help bolster the squad ahead of their push for the title. Ata attended both Arizona and San Diego combines this summer and was recommended for a week-long trial as a result.

The Chicago born forward impressed Horgan enough during the week to earn himself a professional contract in Europe and will link up with Tagbo as the club looks for promotion to the Irish Premier League.

Ozbay had previously played with PSC’s U23 San Diego based elite academy in the summer of 2014, after graduating San Diego State with no professional opportunities immediately on offer. This is where he first showed his potential to agency staff, and began his journey into the professional game in Ireland. PSC Staff caught up with Ata following this exciting news to find out his thoughts.

Ata can you tell us a little bit about your background?
I am 24 years old. Born and raised in the beautiful city of Chicago. My parents are Turkish immigrants, and I have two older sisters that are twins. My love for soccer came at a very young age from my dad, who is a fanatic Galatasaray fan.

How did you find out about PSC and end up playing with their San Diego U23 program last year?
A friend of a friend discovered that a U-23 team was starting to compete in Carlsbad early last year, and I corresponded with Tom Taylor of PSC (and now the Tulsa Roughnecks). After a few practices and games, I committed to joining the team. My performances for this team are what opened up some early opportunities through Coach Taylor, who informed me about PSC and its services.

So you attended both Arizona and San Diego combines this summer. It’s not always easy when you have a lot of players competing for the same spots and trying to impress coaches, how did you find both events and what did you think of your own performances?
Both of these events were equally impressive in their own ways. First, the Arizona combine was very enjoyable. The nature of it felt as close to professional as I have experienced, as it was a residential combine. The facilities were top quality, and the isolation from “life” allowed for all of the players and coaches to really focus on the quality of soccer, and were able to form personal relationships. Despite the heat, I think everyone at that combine played at a high level. The Carlsbad combine was also unique. About 120 players attended, and yes, it can be extremely hard to impress with your performance when 119 other players are trying to do the same. Despite this, I focused on going out to each session and doing what I know I do best, while also trying to maintain a positive attitude, and to help my teammates do their best, whoever they may be. It sounds a bit cliche, but that’s really all a player can do.

How have you found the transition coming out of college and trying to make the make it into the professional game?
It has been particularly difficult transitioning from college and continuing to pursue professional soccer. Players, like myself, lack the structure and discipline found in college ball, where we regularly lift weights, do conditioning, and train 6 times a week, while also having access to a training room for recovery/rehab purposes. Without these things, it is ultimately left up to the player to try to maintain a high level of fitness and dedication necessary to finally get the opportunity to play professionally. It’s a delicate balance between putting in the work and facing “real life” issues, like having to work.

About the combine itself, what advice would you give to players attending future combines about how to best prepare and best showcase themselves?
I would tell each player to take care of their bodies and minds. Three days is not a lot, so a player should focus on every play to ensure their best exposure. Too often a bad play leads to loss of morale or focus, and a player wastes the precious minutes given. Also, act like you don’t have any friends or former teammates or opponents there. There is no room for lollygagging, as the coaches see everything. Respect each player, but go out there and do what you know you do better than everyone else, because at the professional level, it’s a job, not collegiate or local club team like we’re used to.

What are you looking forward to most about your time in Ireland?
I am looking forward to bringing my style of play and my specific talents to a club. I want to see where my strengths and weaknesses rank at the professional level. I would say the “overall experience” as well, but I’m not here to fulfill boyish desires, I’m here to succeed.

Is there anyone you would like to thank or show appreciation to for getting this far?
I would like to thank the PSC Agency Staff, as they he have been one of the most important (and possibly only) people in my corner since early last year. Without them, I would not have had these opportunities. Also the obvious–my parents. Their love and support made it possible. Lastly, my closest-knit group of friends. After college soccer, a lot of people write you off, but these friends of mine have not stopped believing that I would get my chance to play at the professional level, so here we are.

PSC wish Ata all the best in Ireland this season and hope to see Finn Harps top the table come October!