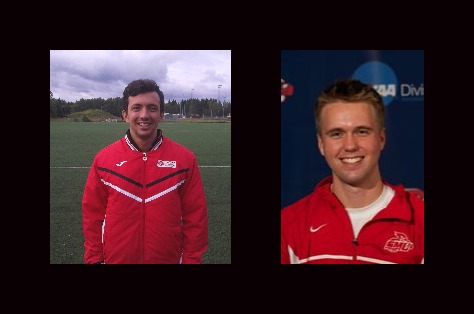 Elliot Hord and Gunnar Knutson, both 24, impressed during this summer’s event in Scandinavia after attending try-outs in Arizona and For

t Lauderdale respectively – their first with the company.

The duo displayed outstanding on and off-field qualities against professional opposition, which included their new club, and will now realize their dreams of playing soccer in Europe.

Hord, a former Fresno Fuego player, was noticed by scouts during the tour’s opening game, where he registered an assist, before going on to catch the eye of the Yxhults staff in game two. The UC Davis graduate was immediately invited to train with the club, and signed a deal shortly after.

Knutson meanwhile, who operates as a central defender, is a Saint Mary’s university graduate, who will now look forward to playing abroad after an impressive college career.

In a joint interview below, we catch up with the pair, who have been reflecting on life as professional soccer playesr in Sweden…

Explain in your own words how you feel about signing your first contract in Europe? What is it about playing in Sweden that excites you the most?

Gunnar: I’m beyond thrilled to sign my first professional soccer contract. Ever since I was a kid I dreamed of playing professional soccer, so this is a dream come true for me. I’ve lived in Minnesota my entire life, so having the opportunity to live in another country and experience a different culture has been exciting!

Elliott: Finding out that a club wanted to sign me was a huge weight off my shoulders. When I signed the papers, I knew right then how official things were and I could not stop smiling. Although it was my first experience with signing, I felt like it was something that was supposed to happen, I was ready.

How did you hear about PSC’s combines, and what motivated you to attend?

Gunnar: After reading the testimonials and success stories I became very interested in attending a combine and decided to sign up for the one in Fort Lauderdale.

Elliott: After spending time in Tulsa, Oklahoma with the Roughnecks, assistant coach Tom Taylor and I were in contact despite being released from the team. After leaving, Tom was adamant about me to continue to play and get some more experience, especially overseas. Once this combine came along, he told me that this would be a great step toward playing overseas.

What were your thoughts on the event in terms of quality of player, exposure received and coaching/guidance received during the event?

Gunnar: The number of quality players that attended the Fort Lauderdale combine impressed me. This made the combine extremely competitive because every player was giving it 100% in order to have a chance to stand out. The PSC staff did an excellent job of giving players an equal amount of exposure to the attending coaches and scouts.

Elliott: The combine was well done. When I arrived I knew the schedule right away, had my hotel room ready and could easily prepare for the upcoming events.  The coaches and staff were clear about expectations and very straightforward. From a player’s standpoint, that’s what I prefer so I enjoyed that. They got right down to business and were intense during the trainings and games. The level of play was high and, overall, it was a professional experience.

And what did you think about the tour itself? Do you feel the coaching from the PSC staff helped you?

Gunnar: The Sweden/Norway tour was an amazing experience for me. I’d never been to Sweden before and instantly fell in love with this place when I landed in Stockholm on our first day. My team-mates were class players and great guys to be around, and the competition was excellent! I thought the coaches were VERY helpful and provided coaching advice that I’ll continue to use as long as I play soccer.

Elliott: In regards to exposure, the first game we played there had to be at least five coaches there. We also had the opposing (professional) team’s coach in the stands, and there was not one game where I did not see two or three scouts. The coaching and guidance was extremely helpful. It was good to have a handful of coaches watching the games and giving very specific feedback on my play. I watched video and had some discussion with the staff about positioning and what is expected out of center midfielders.

How has your experience been with PSC staff both at the combine, and in the subsequent weeks between the combine finishing, and you signing in Sweden?

Gunnar: My experience over the past couple of months with the PSC staff has been great. They were very helpful with answering any questions leading up to the combine and tour. When I was asked to play for Yxhults IK, the PSC staff basically took care of everything; all I had to do was get on a bus and move to my new home and start my professional career.

Elliott: The staff communicated with FaceBook and text messaging which made things easy. Also, when a club showed interest, the coaches made it clear to us about who liked who. We also had individual meetings about our play and teams showing interest. There was a lot of communication about opportunities both on and off the field.

Would you recommend PSC combines and tours to other players looking to be seen by professional coaches in Europe?

Gunnar: I would definitely recommend PSC combines and tours to any soccer player aspiring to play professional soccer. The competition and exposure you receive as a player is second to none.

Elliott: I would in a heartbeat. The players that decide to participate with any event hosted by PSC will quickly realize that the staff provided to them has great football knowledge and lots of connections both overseas and in the states.

Do you have advice for other players in the US who are aspiring to become professional?

Gunnar: Never give up on your dream. Work every day to get better and good things are bound to happen.

Elliott: I think patience is key. I have seen a lot of players give up after their first combine or trial with a team. Being told ‘sorry, we are not interested’ is the worst feeling, but what’s more important is how a player can bounce back from that and use it to their advantage. So, be patient and continue to train.

Is there anyone you would like to thank for their efforts/support etc in getting you to where you are now?

Gunnar: First and foremost I’d like to thank my parents, I wouldn’t be where I am today if it wasn’t for them. I’d also like to thank my friends and family members who have encouraged me every step of the way. Lastly, I would like to thank the PSC organization and staff for putting together an amazing showcase tour to Sweden and Norway and giving me the opportunity for exposure to coaches in Europe!

Elliott: Oh man…there’s a ton. But, most importantly, my family. I cannot thank them enough for their support. Moreover, all my former teammates and my club coaches, my college coaches and good friend Milton Blanco. Finally, I’d like to thank PSC for their efforts to push me to the next level and for continuing to provide future aspiring players to do the same.