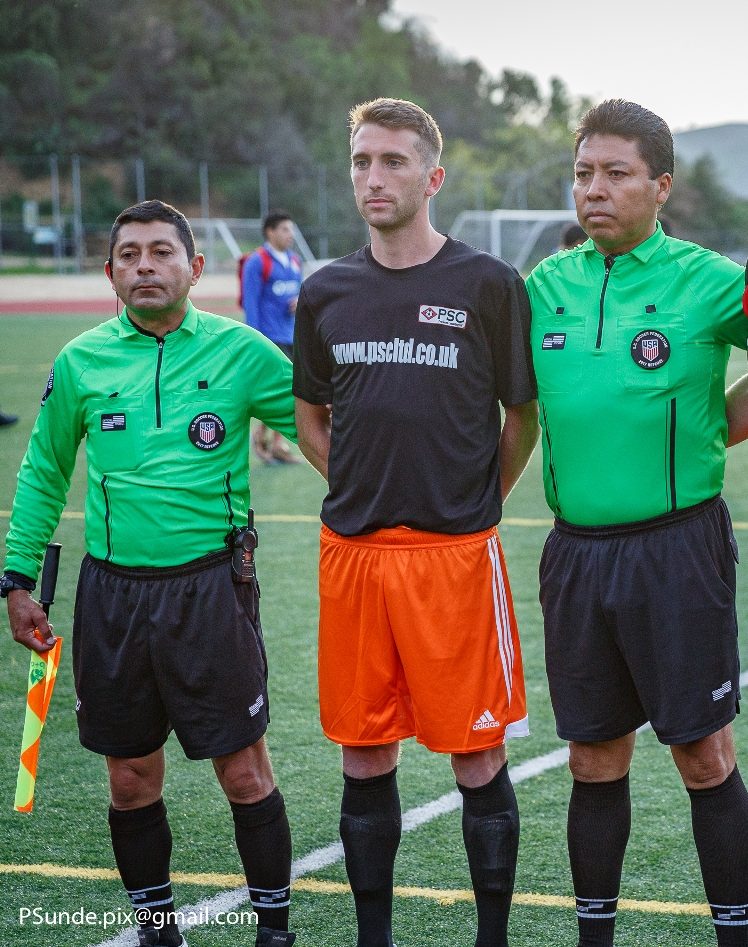 PSC FC got their debut UPSL season off to a perfect start on Saturday evening, producing a 4-0 victory on the road against Santa Clarita Storm at the Glendale Soccer Complex.

Tom Taylor’s decision to opt for a starting line-up consisting of both youth and experience evidently paid off, after goals from Brennan Livingston (2), Sam Haynes and Stevie Manios ensured all three points would be heading back to Orange County.

The opening exchanges of the encounter were played at high speed as both sides looked to grab that all-important opening goal.

And with 29 minutes on the clock it was PSC that took the lead. Manios glided down the left side of the pitch before rounding his opponent and delivering an inch-perfect low cross to Brennan Livingston, who finished with aplomb.

With less than a minute of the opening 45 played, and after a brief spell of Santa Clarita possession, a moment of magic from forward Haynes made it 2-0 to PSC.

Centre midfielder Shane Steffes played a delicate chipped pass toward Haynes on the edge of the box, who controlled the bouncing ball with his midriff before producing a Marco van Basten-esque volley into the top right-hand corner of the net.

An energetic half-time team talk from player-coach Taylor seemingly inspired his players heading into the second period of the game, as they emerged a more vibrant, possession-based team.

A number of perfectly-orchestrated one and two-touch plays saw PSC largely dominate the remainder of the encounter, but it wasn’t until the 82nd minute that the lead was increased.

Former Tulsa Roughnecks player Iarfhlaith Davoren delivered a through-ball into the path of Livingston on the right side of the pitch, who fired the ball across goal allowing Manios to stroke home.

And with four minutes of normal time remaining PSC netted for the fourth time. Taylor’s left-footed pass out to the right side of the pitch found Livingston, whose perfect control left him with just the ‘keeper to beat; and beat the ‘keeper he did – making it 4-0 to the visitors.

When reflecting on the game, Taylor said: “I thought we were quite lucky to be coming in at half-time two goals ahead. Santa Clarita played some nice stuff and we didn’t keep the ball enough.

“A brief reminder during the half-time interval directing the boys to move the ball better allowed us to play much better in the second half.

“Four goals and a clean sheet – it was a good start to the season,” continued Taylor.

If you are interested in trying out for PSC FC, please contact Head Coach Tom Taylor at tom@pscltd.co.uk.

Tryouts will be staged on April 3 and 4 in Irvine, California.