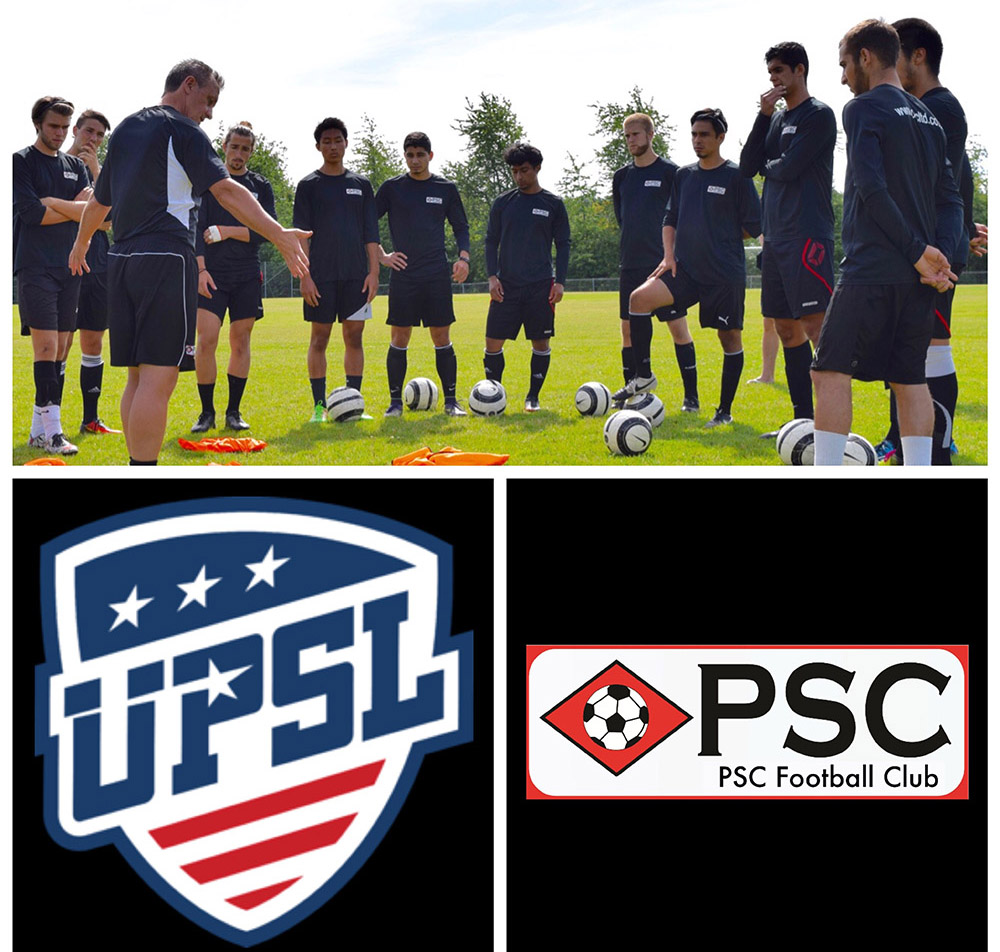 PSC’s UPSL 2019 UPSL team will be holding open tryouts for our season running from September – December.

This season, our squad will be based in San Diego, and coached by former MLS coach Guy Newman, and PSC Director Tom Taylor.

To read more about the program, please click here:

Details of our tryouts are listed below. The cost is $50 and covers attendance to at least 2 of the listed tryouts. Players are welcome to attend all three sessions if they choose.

If you are ready to sign up, you can do so here:

MISSION: PSC’s UPSL program was formed to offer a continued development program, consistent training and a professional environment for players that attend PSC programs around the world. With its Southern California base, top class training facilities and participation in the UPSL Pro League it offers a perfect environment for players that are without a club and aspiring to play at the professional level in Europe, Asia or North America.

The aim of the club is to develop players for the professional level in Europe or the MLS, USL, NISA. With our extensive network around the world we have the ability to place players at all levels if we feel they have the mentality and qualities to progress to a higher level. The first step is to develop and prove yourself in the UPSL elite program!

For too long in this country there hasn’t been an effective pathway and development system for players aged 16-25 to progress through the soccer pyramid. Our UPSL program will allow players to receive professional daily training and competitive game situations in order for them to progress quicker and more effectively than the typical American academy and college system. There is no academy in the USA that comes close to amount of players we place annually into professional European and American clubs so now is a crucial time for us to start developing our own players and getting them ready and prepared!

WITHOUT REGULAR QUALITY TRAINING & MATCH EXPERIENCE THEN A PLAYER CANNOT DEVELOP EFFECTIVELY. WITH PSC A PLAYER WILL PLAY WEEKLY GAMES AND TRAIN THE SAME AMOUNT OF HOURS AS A YOUNG PROFESSIONAL IN EUROPE!

We also possess the ability to send our players to college soccer or the USL / MLS levels if they standout and perform consistently well during the academy. Our coaching staff has played and coached at this level and have had an abundance of clubs work with us for player recruitment since our inception.

Looking to expand the company and create further opportunities for players, PSC linked their existing UPSL Programme and team (PSC FC) with LA Galaxy OC and Barcelona Cantera in San Diego – providing a pathway for local Orange County and San Diego youth players and aspiring professionals to reach the highest levels of the game.

*Once registered you will receive details of the tryout within 48 hours such as time, location, what to bring and waiver form.

The club are looking to create an exciting new roster ahead of the opening game in September and will be starting from scratch. Current Barcelona Cantera Academy players need to contact their club coach and complete a registration form below before Thursday, August 22nd if they want to attend the 2019 tryouts.

PSC Soccer is proud to be working alongside Barcelona Cantera (San Diego) as a partner club for the 2019/20 season and will enter a UPSL Pro Premier side into the San Diego division. Barcelona Cantera are a San Diego Community based Youth Soccer Club that plays out of the East County, Escondido and South Bay Areas. The partnership will create a direct pathway for Cantera players to receive professional exposure and a pathway into the pro game in Europe as well as domestically.

The club’s Director of Coaching, Guy Newman has been based in the San Diego area for over 30 years and has previously coached at the MLS level with Kansas City and in the Major Indoor Soccer League with teams such as the San Diego Sockers and Las Vegas Quicksilvers. Newman has been the Head Coach for PSC’s UPSL Pro Premier side based out of Orange County, LA Galaxy Orange County PSC as well as numerous other PSC programs.

“PSC is the most successful company in the USA in providing professional opportunities to players of this level and we are proud to be able to offer this pathway for our most talented players at the club said Barcelona, Director of Coaching, Guy Newman. We recognize how difficult it is for players to find opportunities at the next level and often players have to go outside of the college route and further afield to find an opportunity into the professional game. The relationship allows our players elite training, good competition and exposure to professional teams and to PSC staff who have a proven track record of placing players into teams all around the world.”

PSC Soccer (Pro Soccer Consulting) – recognizes the vast amount of soccer talent in the USA and lack of realistic opportunities present into the professional game in Europe and North America. Through their combine events, UPSL program and European Showcases they have seen over 450+ North American based players secure professional contracts and trials worldwide during the last 7 years. In 2019 so far they have signed American players to pro contracts in the USL, CZ Republic, Sweden, Iceland, Estonia, Norway and Malta. The company also provides professional soccer tours to teams of all levels since 2002 and during the summer has provided tours for La Liga Club, Valladolid, French Premier League club, OGC Nice and former English Premier League clubs, Swansea City and Cardiff City.

“We are thrilled to have added a UPSL club in this region as San Diego has so many talented players in the area said PSC Director, Tom Taylor. This will provide PSC with an excellent resource in the San Diego area to identify the next generation of talented players and get the chance to work with them on a regular basis. Over the years we have found many players in this area and have helped them establish professional soccer careers in Europe and the USL. More often than not we have had discovered players that are already at the college level so the massive positive about this relationship is that we will get the opportunity to also aid in these young players soccer development and not just provide them with exposure to the professional level. I am really excited to create this partnership between PSC and Barcelona Cantera and hoping we can discover the next generation of talent in this country. Guy (Newman) is one of the most experienced coaches in this area and has vast knowledge on how to build a successful club in San Diego. I’m sure this program is going to produce lots of talent over the coming years!”

The Mexican front man played previously with the PSC UPSL team under Coach Newman and was placed directly by Tom Taylor into Bodens BK. The 21-year-old has scored 4 goals so far in the 2019 season.

Gianluca Cuomo – Signed in the USL with San Antonio FC and then with Malta Premier League club Mosta FC. Luca played 12 months with PSC under Coach Newman and signed all his pro deals from PSC recommendations.

Kyle Nelson – Signed pro in the USL with Charleston Battery and had zero pro experience prior to being seen by PSC this Janaury.

Kenny Doublette – Signed pro in the CZ Republic this summer. The 27-year-old had not played pro for 2 years but attended the PSC combine and instantly impressed the staff earning 3 pro trials and finally landing a deal in the CZ Repulbic signing a 1 year pro deal.