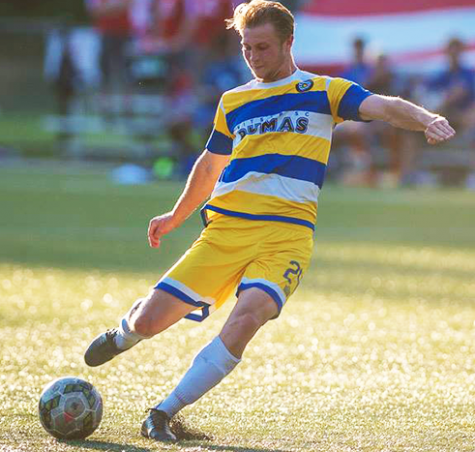 Pro Soccer Consulting is delighted to confirm that Logan Miller has signed with USL club Wilmington Hammerheads, after outstanding performances during the company’s Fort Lauderdale combine in December.

The move marks further progression for the young midfielder, who previously played for Kitsap Pumas in the Player Development League [PDL].

The 23-year-old, a graduate from the University of Central Arkansas, helped the Pumas to an undefeated regular season in 2014-15, and was naturally delighted to have continued his development with the help of PSC.

“I’m very happy to sign with Wilmington,” he said. “The professional game isn’t easy to get into and I feel very fortunate to be given a shot at it. I know a lot of very good players who have not been able to get a foot in at a professional level simply because they haven’t had a good opportunity to really showcase their ability in front of coaches. So, I feel extremely fortunate. It was a really exciting week and that excitement is still very well alive for me.

“North Carolina’s soccer culture really excites me. I’ve been able to see how excited about the sport the whole state is, and I am very excited to be a part of that.”

Asked what motivated him to attend the event, Miller revealed that Mark Briggs – who will now coach him in Wilmington – recommended the combine.

“The combine as a whole was run very well, and the coaching was excellent. The biggest thing that impressed me was the coaches’ enthusiasm to instruct so many players who they had never even met before. It was obvious that they were excited to be there which made it an even better experience for the players.

“I would definitely recommend the PSC combines to other players, mainly because of the track record. You can see just from PSC’s website that they are actually helping players get signed onto teams here in the States and also in Europe.”

Miller finished by offering a word of advice for other aspiring players that may be interested in attending a combine in the future.

Everyone at PSC would like to wish Logan well in his upcoming season with the Hammerheads.