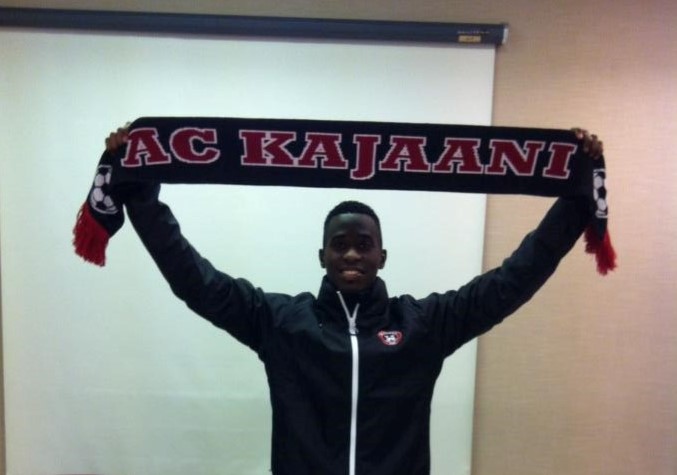 PSC are proud to announce the signing of Jared Bennett to AC Kajaani after the forward impressed on looking coaches during PSC’s 2015 Showcase Tour to Sweden and Finland. Jared arrived to the Sweden leg of the tour late due to travel issues but wasted no time making an impression on the Finnish coaches during the second leg of the tour.

After watching him for just 15 minutes in a 2-1 win versus AC Oulu, Juha Malinen, Head Coach of Finnish Premier League side RoPS, recommended Jared to AC Kajaani of the 2nd Division and within 24 hours Jared was on his way to Kajaani to meet the coaching staff and train with the squad.

The Trinidadian forward has signed a 1 year deal with the club who have tight connections with RoPS of the Premier League who will be monitoring his progress closely. It is the 24 year olds first professional playing contract.

We caught up with Jared after his press conference with the club to find out his thoughts on the last 7 days:

Jared, firstly congratulations on signing your first professional contract! It was quite a unique signing in the sense that after just 15 minutes of seeing you play the RoPS Head Coach was on the phone to Kajaani recommending you! How does it feel to make such a good impression so quickly?
Thanks a lot. It’s always a fantastic feeling when someone shows interests in your God given talents, especially after just 15 minutes. I guess I filled the exact specifications of the type of player they were looking for. It’s a really awesome feeling.

Its been quite a whirlwind 7 days for you, leaving Trinidad as an amateur and within a week of landing in Sweden you had traveled to Finland, secured a trial and earned a pro contract! Take us back to the beginning how did this journey begin?
In 2014, I sought after many avenues whereby I could fuel my dream. A search online led me to ‘combines’ which would legitimately give me an opportunity to play in Europe. I came across quite a few, however PSC appeared the most legitimate. I attended the combine in Orlando, Florida and it was a truly memorable experience. The location, (Omni Resort at Champions Gate) and pitches were fantastic. It was a refreshing experience to be around and compete against like-minded individuals who were also pursuing the dream. It was motivating. The coaches that were present were easy to speak to and ask for advice. It was the most supportive and professional footballing experience that I have ever had.

Why did you choose PSC over other agencies/combine opportunities?
The experience base of the staff and coaches, as well as the teams that PSC has access to; was a major motivating factor. Reading the ‘success stories’ of players who attended combines, also realizing that two guys from Trinidad and Tobago had been previously selected; removed all doubts.

Obviously your main goal was to play pro but did you specifically want to play in Europe? If so why?
Growing up in Trinidad and Tobago, anyone with aspirations of showcasing their football talents on a global scale lived vicariously through players like Dwight Yorke and Russell Latapy who flew the flag high and showed that the dream of playing in Europe -where football is more than a sport- was possible. I can recall playing junior football in weathers in excess of thirty degrees Celsius, sporting winter gloves to imitate the European players. Of course it was silly but even as a youth, such was the appeal to be on the same stage as the European football stars that you looked at on television weekly.

Although you’ve worked hard to earn the contract, the hard work begins now by trying to work your way up the football ladder in Europe. What would be your ultimate goal? Is there a particular country you would like to play in?
My immediate goal is to give my all and aid my team toward promotion to the highest levels of the Finnish Leagues and once I’m able to achieve this I am certain that I can fulfill my ultimate goal of playing in the UEFA Champions League and representing my country, Trinidad and Tobago in a major international tournament. I am proud to say that I am a Manchester United fan, the opportunity to play for them would be undoubtedly a dream come through. However, once again I am solely focused on scoring as many goals as possible to assist my new team AC Kajaani to promotion to the highest divisions.

Is there anyone you would like to thank for their efforts/support etc in getting you to where you are now?
First and foremost I give all thanks to God for blessing me with my ability and opening doors when all had seemed to be closed. My parents for investing in me and having patience to help me pursue my dream despite the ups and downs that I’ve had throughout my career. My brother Jomal, he’s my mentor and biggest critic; he’s just as passionate about the game as I am and pushes me daily. My girlfriend Kristal-Anne for her consistent and unwavering support and belief in me. My family members and close circle of friends for all their support and motivation no matter how demotivating situations appeared. I am also forever indebted and would like to give special thanks to the members and staff of PSC for the opportunity, for their vision and belief in my abilities.

Any advice for other players aspiring to become professional?
The dream is NEVER dead. I went through the customary path of a young Trinidadian footballer and because of my faith and persistence, no matter the situation; I can say today that I’m playing football professionally in Europe. God is good and rewards hard work.

Finally, would you recommend the event to other players looking to be seen by professional coaches in Europe?
Definitely! If you really, deep down in the depths of your heart, would like to play at the highest level or a higher level that you currently are: work hard, train hard, ask for constructive advice, keep praying and find a PSC combine that is best suited for your schedule. When you attend, be professional and give it your all. If you’re as blessed as I am, your all may just happen to be good enough to impress the right coaches. It is also integral to stay motivated no matter what.

Thank-you for your time Jared. We wish you all the best in Finland this year and hope that this is just the start of your career in Europe!