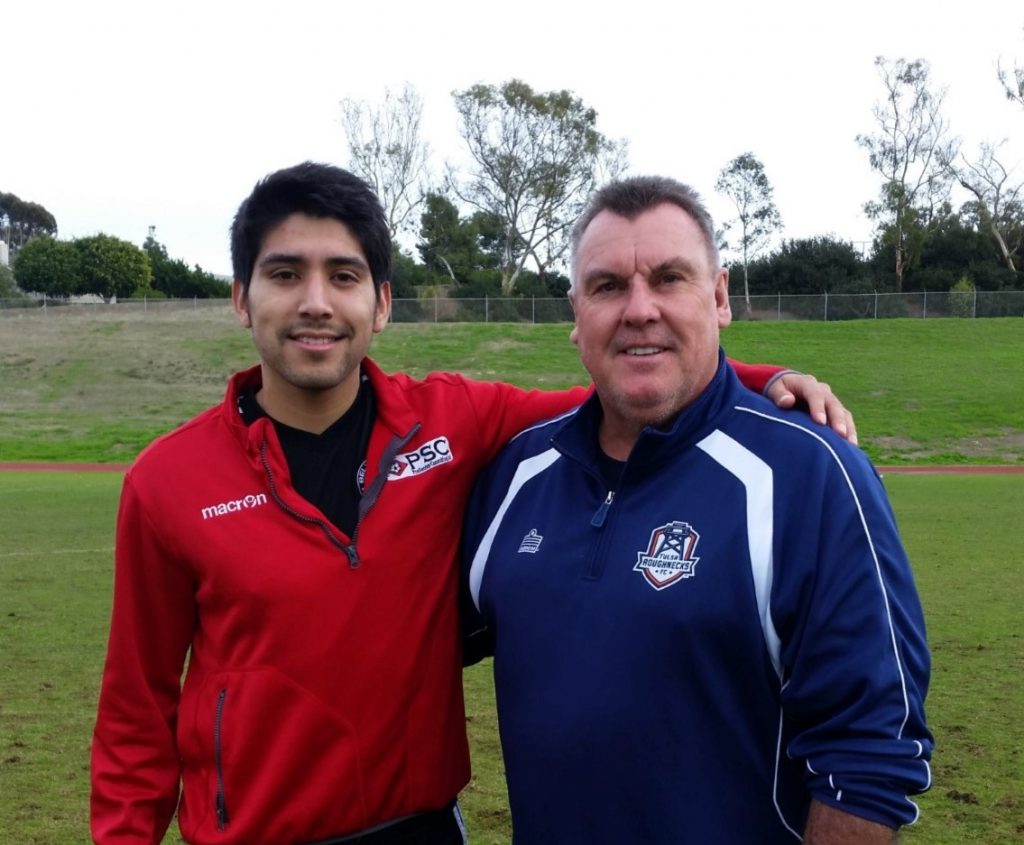 PSC are proud to announce a third San Diego 2014 combine success story as Oscar Jimenez has signed with Tulsa Roughnecks of the USL Pro after being scouted by USL Hall of Famer and new Tulsa Head Coach David Irving.

Jimenez performed strongly at the San Diego event and also attracted interest from Juha Malinen, Head Coach of RoPS in the Finnish Premier League. Malinen invited the him to trial however he chose to sign direct with the Roughnecks for the 2015 USL Pro Season.

Jimenez was a standout player at Mt. Vernon high school before becoming the all time assist leader at Western Washington University. He would go on to record 69 points (6th all time) and 17 goals (10th all time) as a GNAC All Star. He played for the Bellingham Hammers in 2013 and was awarded the team MVP for that season while training with the Sounders U23 team.

2014 proved to be a year of significant development for Jimenez after attending PSC’s 2013 Las Vegas combine where he played in front of both Coach Malinen and Coach Irving but did not attract interest from either coach. PSC Agency staff recognized Oscar’s ability and invited him to attend a two week showcase in Sweden in early 2014 where again he again performed well but received no offers from clubs. PSC staff still believed in Oscar’s ability to make the professional game and arranged for a pre-season trial with the Wilmington Hammerheads but again no permanent contract was offered.

Despite these setbacks, and despite turning 25, both PSC and Jimenez were not willing to give up which saw the central midfielder attend another combine in San Diego, December 2014. This time his stand out performances resulted in a trial offer with Finnish Premier League side RoPS and a contract off from Tulsa Roughnecks of the USL Pro as he walked off the field on day 3.

Oscar could have been forgiven for thinking it was not worth his time to attend another combine after being seen by both coaches the previous year and not receiving any interest from either – his story goes to show that although things do not always work out as planned, persistence pays off.

“Explain in your own words how you feel about signing your first pro contract?”
Definitely has me smiling, I have never felt this kind of excitement before, it’s new and I love it, but I’m definitely trying to embrace the fact that I finally did it. I had been pushing myself really hard for the past couple years and so it’s such a relief to have finally accomplished what I’ve dreamed for since my childhood. It has taken a lot of sacrifice and a lot of mental strength to stay focused on my goal. However, I’m looking forward to getting started, I finally have my foot in the door and now I can’t wait to blast the door open.

“What is it about playing in the USL that interests you the most?”
What interests me about playing in the USL is that I’ll have the opportunity to get some looks from MLS clubs while playing in this league. With the new expansion of teams and the new format, I believe the league is going to be quite exciting. A lot of players in the MLS have been through USL at some point in their careers, so it’s nice to have that opportunity as well.

“So, both coaches who made offers for you had already seen you previously – Why did you decide to attend the San Diego combine even though they had seen you and previously not shown any interest?”
I had no offers from the Las Vegas Combine last year and personally didn’t think I had my best performance there. After getting back from the tour, and also the pre-season with Wilmington where Coach Irving was coaching I was very disappointed not to have any offers. I have always believed I have what it takes to make it to the next level, I work so hard and love the game too much to not make it a reality. It has been my goal since I was a little kid, and having to go through minor setbacks and stuff have only made me hungrier for it. So… I guess I attended the San Diego combine because I wanted to prove coaches that had seen me before wrong, I wanted to be back and show them that there is more to me than what they saw LAST time.

“Well you certainly proved them wrong! Is there anyone you would like to thank for their efforts/support etc in getting you to where you are now?”
I would like to thank my friends, my family most importantly, because they have always been supportive of my decisions and have always believed I could get here. They have seen me go through the struggles and the disappointment, and still found a way to get me to keep believing in myself. I would also thank all my coaches throughout the years, especially Travis Connell and Greg Brisbon at WWU for making me a better soccer player year after year, always pushing me harder and harder to be the best in everything I do. Todd Stauber for taking me under his wing when I was a young player, working on technical skills and throwing me into high level adult leagues even though I was young. Darren Sawatsky at Sounders U23, who taught me how to be a professional in all aspects. To work harder than anyone else out there. I learned a lot from him throughout my two summers there, I believe that what he engrained in me while I was there has made me a stronger and smarter player. Lastly, the entire PSC staff for their hard work and dedication in making this happen for me.

“Any advice for other players aspiring to become professional?”
The only advice I would have to aspiring players would be to enjoy how fun the game is, to stay strong and to believe. There will be a lot of tough times, but you have to learn how to handle them and get through them. Understand that in order to get where you want to get, you’ll have to sacrifice some things, whether it be loads of time, friends, etc. Good luck, and keep believing.

“You’ve had a fairly long standing relationship with PSC, what have you enjoyed about working with us at combines and showcases?”
My experience with PSC has been great, they have been a strong support system for me. One of the things I really enjoyed about the entire PSC staff is how they made me feel very important to them. They always had good things to say about me and always provided me with feedback of what I could do better.

“How did you first come into contact with PSC and why did you choose PSC over other agencies/combine opportunities?”
I actually found PSC through social media. I wasn’t blessed with the opportunity of getting invited to MLS or USL combines after my college season so I had to find another way. I researched the agency thoroughly and thought it was a good choice to start off with. I had a very good experience the first time so I kept working with them.

“Would you recommend PSC events to other players looking to be seen by professional coaches in Europe?”
I would definitely recommend PSC to any player who is looking to become a pro. They are organized, they care about you, and they do the best they can to get you the most exposure possible if you really have what it takes.

“Thanks Oscar, we wish you all the best for the upcoming USL season!”