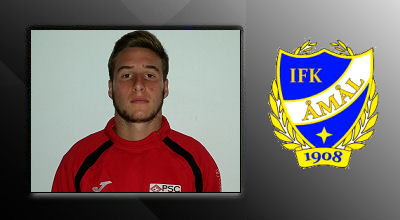 Pro Soccer Consulting is delighted to announce that Cameron Selamie has signed for Swedish Second Division club IFK Amal, after impressing against professional opposition during the company’s recent development tour in Scandinavia.

The young striker was first seen by agency staff at the Fort Lauderdale combine earlier this year, and was subsequently invited to join the two-week trip. Selamie responded excellently to the professional environment, scoring four goals in his first Under-21 game, before making a step up to the senior side in unusual circumstances.

Latorp IF, PSC’s injury-hit opponents for the senior team clash, were in need of an extra striker, and borrowed Cameron for the game. The 20-year-old had been watching from the sidelines alongside his U21 teammates, and took his chance in style, coming off the bench to score two goals in 15 minutes.

An eye-catching cameo from the former Jersey Knights player was enough to convince Latorp Head Coach, and PSC Scandinavian Recruitment Partner, Julian Lundberg of his abilities, and he was sent to trial with Amal the next morning.

The Mercer College graduate made his move across the Atlantic, to realize his dream of playing soccer in Europe. His story is further proof that PSC’s development tours are just one of many routes into the professional game offered by the company.

We caught up with Selamie recently to get his thoughts on the tour, and his big move to Sweden…

“It is exciting and also scary,” he said. “The competition is great and the entire football club have been extremely helpful.

“My father encouraged me to play the Fort Lauderdale combine, I always asked him to join professional training camps. Competition at the combine itself was great. There were lots of outstanding players, and coaching and guidance in abundance. It was a very helpful event – I was nervous, yet excited to show myself.

“The tour to Sweden that followed was also outstanding, I made lots of friends from different parts of the world. The level of coaching was great; they allowed me to play as a forward and encouraged me to score goals.

“I did not expect things to happen so fast, but I was very happy to get picked so soon. I have been prepared for the moment, and have dreamt of signing with major football club since age of seven. My father and I traveled to Old Trafford to watch Man United; from that point, I knew want to be professional footballer.”

Asked to give some words of advice for other aspiring players in America, he added: “Never stop dreaming. I am proof that with hard work and proper training, good things happen.

“I will absolutely recommend PSC, and have already spoken to my friends, telling them to attend USA combines. I’d like to thank both my parents, and the PSC staff for their 100% support.”