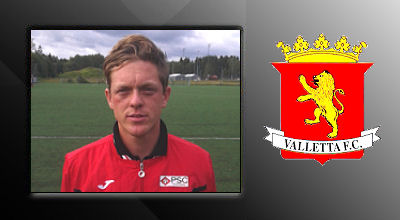 The 25-year-old was recommended to the club’s Head Coach by PSC staff on the back of several standout displays in Sweden and Norway, having caught the eye at what was just his first event with the company back in June.

O’Brien excelled against professional opposition in Europe, and was the tour’s outstanding central midfielder, proving to the various coaches and scouts in attendance that he was capable both on and off the field.

The Vanguard University graduate has always dreamt of playing at a professional level, and expressed his gratitude to Agency staff members when we caught up with him recently.

“I have participated in many combines elsewhere, forked out hard-earned money and it’s typically ended with ‘we were very impressed with you, but…’ – I was tired of the same answer,” he said.

“My friend Sam mentioned how well known Paul Taylor [PSC Director] was in the world of soccer, so I knew I had to take my chance. I’m now happy to be in a full-time environment where I can focus on my game with no distractions.

“Malta excites me because I can learn a lot from our coaching staff and make an immediate impact at the club. Also, we are a neighboring country to some of the top Italian, French, and Spanish leagues.

“You could see at first glance that everyone participating in the combine had a very strong desire and motivation to reach the next level. I didn’t take much time to assess the others because I knew if I did my job, nobody stood a chance. The coaches that attended gave valuable feedback after each game and were available to any questions.

“The tour was very well-organized and incredibly professional. Without a doubt, I developed during the tour. There are remarkable amounts of knowledge given by all the experienced coaches. I also like that the tour provided presentations on elements like psychological training and how to be a complete player, which were very in-depth and beneficial.

“I have always been confident in my footballing abilities. I knew with PSC and their strong connections, that all I needed was a one-way ticket. I’m playing in the highest division in Malta, players are well taken care of, so it was a no-brainer.

“The PSC staff from day one has provided very clear information in their emails, so I never really need to ask too many questions. When I did, they are very honest and prompt with their responses. Now that I’m in Malta, the company continues to communicate with me frequently and it has become a strong relationship.”

Kyle added that with hard work, it’s possible for other aspiring players to achieve their goals of reaching the highest level, and gave some advice to those thinking about attending a future combine.

“I would recommend it, but to only the dedicated footballers,” he continued. “The ones that wake up at 6 AM, hungry to be the best, study football in their free time, and the last ones to leave the pitch. You earn your luck through hard work.

“I see football as a boxing match, you do not have time to wait for the third round or you will have already lost the battle. Business needs to begin from the first second, so make the most of it. But be reasonable with yourself too.

“Finally, I’d like to thank my mom, dad, sister, grandma, friends, mentor and all my football coaches that have invested countless hours in me, as well as the PSC Staff for making this all possible.”