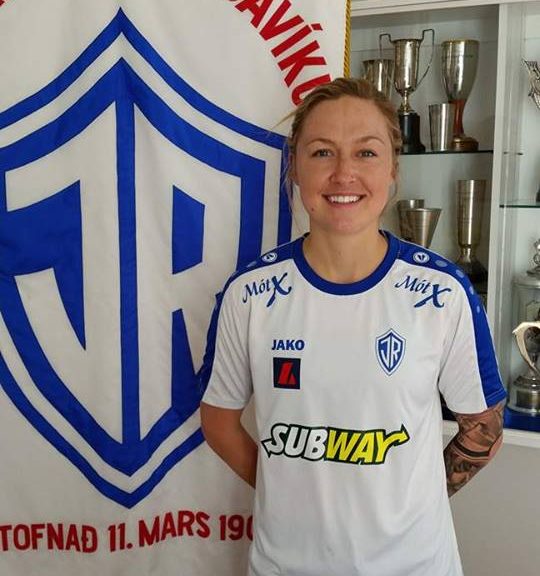 Rosenquist’s signing is the third Icelandic contract PSC has secured in the women’s game this year. The 24-year-old defender follows in the footsteps of both Tori Ornela, who signed with Premier League side Haukar, and Michaela Mansfield, who signed with fellow First Division outfit Thróttur.

All three players were in attendance at our Women’s Pro Combine in San Diego last year, an event that showcased some of the most impressive talent we’ve seen at our women’s tryout events. Furthermore, with eight players offered trials and contracts with clubs outside of Iceland following the combine, it makes the San Diego tryout event one of our most successful to date.

“The process has involved a lot of patience, mainly waiting to hear back about different clubs, but overall it was a very professional process where my needs as a player were put first and I was kept informed the entire time,” said Rosenquist when reflecting on her move to Iceland.

“I would like to acknowledge and thank Simon Deeley [PSC Director of Women’s Soccer] for all of his efforts in helping me find a club. He did a superb job of keeping contact with me, while sending off videos, talking with coaches, and looking for new opportunities. He’s been instrumental, and is the main reason why I’m here in Iceland.

“I hope that I can bring the edge that Reykjavík are looking for and look forward to a great season and the chance to help them win the league,” she continued.

And Reykjavík representative Gudmondur Gudjonsson revealed just how the club came to acquire Rosenquist, while reflecting on his relationship with PSC.

“A women’s coach and good friend of mine, Jón Páll Pálmasson, told me about Mykaylin after he saw her at one of PSC’s Pro Soccer Combines in the USA,” said Gudjonsson.

“He [Pálmasson] put me in touch with Simon Deeley, and after some communication we sorted out a deal for Mykaylin. Simon has constantly been updating me and is always willing to help out with whatever is needed. The club owes him the greatest gratitude and we will without a doubt contact him when we are searching for players in the future.”

And Gudjonsson went on to praise Rosenquist’s qualities, both on and off the field: “Her reading of the game as a defender impressed me,” he said. “She always gives 100% into the game. And after talking to her via telephone and instant messaging, I quickly realised that she was really down to earth and focused on doing things right, while wanting to succeed in her football career.”

And Deeley, who dealt with Rosenquist’s transfer from start to finish, praised the professionalism of both the player and the club: “Both Mykaylin and the club have been great throughout this whole process,” said Deeley. “Sometimes things like this take a few months to come to fruition, but both parties have made it very easy.

“Mykaylin performed excellently in December and has rightly been rewarded with a number of offers and fully deserves this opportunity in Iceland.

“I think American girls have the quality to make an impact in Iceland and Mykaylin is no exception. I expect her to do well in Europe and hope she can help Reykjavík achieve their goal of securing promotion this season.

“It’s also great for PSC to see another player sign in Iceland. We’re hoping that Mykaylin, Tori and Michaela can make a big impact and more women can follow in their footsteps and secure contracts in Iceland,” he concluded.

All of the staff here at PSC wish Mykaylin the very best of luck during her time in Iceland.

PSC will be hosting two Women’s Pro Soccer Combines in January 2018. The tryout events are aimed at women looking to break into the professional game in Europe.

You can see all of our women’s success stories here.