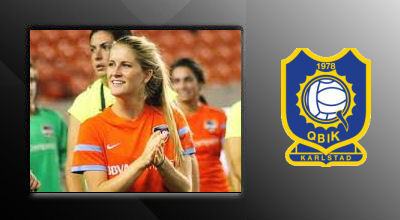 The midfielder becomes the fourth PSC player recruited by the Scandinavian side in just six months, after the news of Hanna Terry’s recent signing, and moves for Hannah Kimsey and Lauren Badalamente last summer.

O’Brien – a University of Tulsa graduate – was part of PSC’s Salinas combine in December. The 23-year old chose to attend the combine on the advice of her brother Kyle, who knows all about becoming a professional through PSC, after penning his first contract in Europe last summer.

The signing represents another significant move for QBIK Sporting Director Tommy Bang, who is looking forward to establishing “a long relationship” with PSC.

“The quality of the players at these events is very high level, it’s surprisingly good,” he said. “I would say most of the players would make it in our league. I’m not just happy to be returning with two new players, I’m excited. We found exactly the type of players we were looking for, ones we didn’t really have at QBIK.

“PSC has been great in every aspect; from day one at the combines, to the final stages where a contract is signed. In the process of talking to the player and working out a contract, they’ve been outstanding. The company presents great players for clubs in Europe, players we would never see if the combines didn’t exist, and we’re looking forward to a long and successful relationship with PSC.

Asked about his new signings, and the qualities that made them stand out at the events, he added: “Jordan wants the ball, she’s never afraid. She always plays with a smile, which is fascinating and really great to see – she’s a leader! Hanna is a player that always creates chances to score goals. If she doesn’t score, she gives her team-mates the opportunities.

“Both players, Hanna and Jordan, will have very important roles in our staring eleven this season. An advancement from Elitettan to Allsvenskan is realistic within two years; my belief is that our team already this year will be fighting for the top spots in the league. We want to be among the best in Sweden.”

If you think you have what it takes to play professionally and would like to follow in Jordan and Hanna’s footsteps, please check out our upcoming combines.