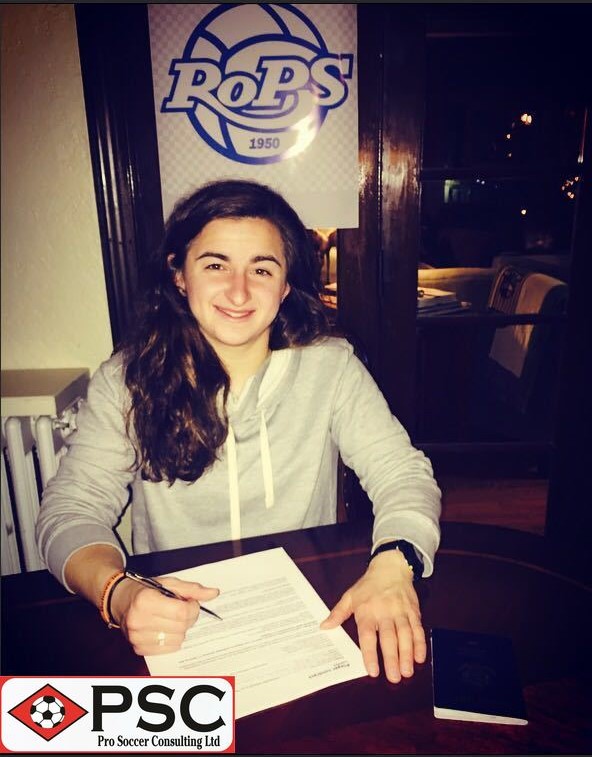 Followers of PSC’s success in the Women’s game will know Tori Christ well as PSC’s first official combine success story last year when she signed with Vasteras BK30 after her performances at our inaugural PSC Women’s Combine in San Diego.

After an impressive year with Vasteras, which saw them narrowly miss out on promotion, and make a number of personnel changes within their organization, including a new coach, Tori decided to attend PSC’s Salinas combine to showcase herself to coaches in the Women’s game and to look for other opportunities to continue her professional career.

Although proving to be a talented goalkeeper at last year’s San Diego Combine, at the recent Salinas Combine, Tori showed how much she had improved from her time in Sweden. In a rather unusual turn of events, however, it was not an opportunity from the attending Women’s Combine coaches that led to Tori’s recent signing. PSC’s men’s combine was beginning directly after the women’s combine, for which Head Coach of Finnish Men’s Premier League side RoPS, Juha Malinen, was in attendance. When Malinen arrived 30 minutes early to the mens session, he walked past the goal Christ was defending, seeing her make a string of impressive saves which prompted the Finnish coach to recommend the goalkeeper to his club’s female counterparts, who signed her without trial.

Christ’s story shows how unpredictable football can be. Without a men’s combine taking place concurrently, and without Malinen arriving unexpectedly early to his own session, this opportunity would not have presented itself to Christ, who will now continue her European professional career in the Finnish Premier League.

Despite the unpredictability of the situation, Christ has earned her opportunities with her hard work and performances. She has become, quite literally, a mini celebrity for becoming a professional goalkeeper at a height of 5 foot 3, proving that hard work and determination can overcome the stigma suggesting goalkeepers need to be tall to succeed.

What did you find most valuable about your time in Sweden? How did it aid your development?

“Sweden was a great experience, I think one of the biggest things was a growing confidence in the goal and in my ability. With the experience of starting and playing in every game, I felt like my team believed in me and trusted my instincts in organizing the defense and being a strong presence in the goal. I was exposed to a different style of play and training which pushed my skills to develop in a way that made me a more versatile goalkeeper. The league in Sweden was both possessive and physical, and I was challenged to be more aggressive on crosses and to communicate more efficiently and effectively because of the language barrier.”

Did you notice any difference in the standard at PSC’s Salinas combine compared to the San Diego combine you attended the previous year?

“Although I thought the San Diego combine displayed a good level of play, the Salinas combine this year had a lot of talent and a fast pace to both small sided games and full field scrimmages. I think the number of recent signings from the women’s combine at Salinas speaks to the quality of players that attended.”

It wasn’t quite the normal procedure of signing at the combine. Can you talk us through exactly how you were spotted and who by?

“After the first day of small sided scrimmages, Simon Deeley and the PSC staff approached me and said that Juha Malinen from RoPS had watched the training and was impressed with my goalkeeping. His men’s team plays in the top division in Finland and are currently in the Europa League, so it was very exciting to be recognized by a Coach of that caliber. Juha reached out to the RoPS women’s team and told the coach and organization he thought I would be a good fit for the team. PSC then followed up by sending my resume and highlights through and they decided to pursue me as their goalkeeper. It was a longer process, but it ultimately culminated in a contract offer.”

How has your relationship with PSC staff been since the combine and through the process of signing?

“I can’t say enough about the PSC staff and organization. Ever since the San Diego Combine and my subsequent signing with Vasteras BK30 of Sweden, Simon Deeley has been so supportive and thorough. Throughout both signings he has made me feel comfortable with the process by checking in and making sure to update me with new information as soon as it is available. It is very clear that in all his discussions with the prospective teams, Simon always has my best interest at heart.”

You’ve already spent a year in Europe, Sweden, what is it about Finland that excites you?

“I’m excited to be a part of the RoPS organization, as it is a very well respected club across Europe. It is a great opportunity in a soccer sense, and beyond that it’s an opportunity to continue to grow as a person and to immerse myself in a new culture. I’m looking forward to learning about Finnish customs, meeting new people, and hopefully learning a little Finnish along the way. The coaching staff and a few players have already reached out and made me feel comfortable and excited to join them for the season. I am extremely excited and grateful for this experience, and I sincerely thank Simon Deeley, PSC and the RoPS staff for believing in me and providing me with this great opportunity.”

Tori’s signing with RoPS means that the club will now field American goalkeepers on both the men’s and women’s side after Tyler Back, who also attended PSC’s Salinas combine, signed with the club earlier this year.