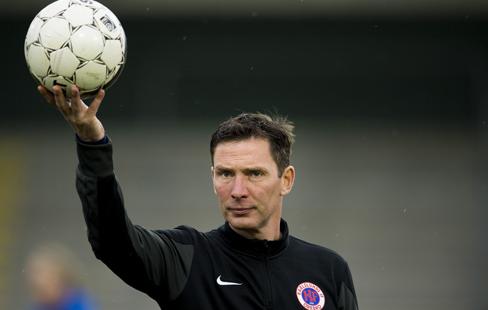 KIF Orebro Women’s Head Coach Rickard Nilsson will be reuniting with PSC Soccer Academy this December in Fort Lauderdale in search of further talent, having been impressed with the girls in attendance at the 2014 event.

In December 2014, Rickard and fellow Damallsvenskan Coach Martin Sjongren attended PSC’s inaugural Womens Pro Soccer Combine. the event attracted a high standard of players  and went on to produce three success stories of US players signing or trialing in Sweden.

Since then, PSC have gone from strength to strength in the Women’s game and have now seen over 10 success stories in the European game across 2 countries. Coach Nilsson has also seen his star rise as KIF Orebro qualified for the European Champions League, defeating FC PAOK in Greece to advance to the quarter finals where they are currently tied with Paris St Germain leading into the Second leg in Paris. Coach Nilsson took time out ahead of preparations for the second leg to discus with PSC what he is looking for at this years combines.

Hi Rickard, for those who aren’t familiar with you, can you give us a brief background on your experience and history in the Women’s game?
Certainly, I have coached Kif Örebro for the last 4 years in the Swedish Damalssvenskan (Premier League). The first year was tough finishing 10th in the league and close to relegation. But I dont give up easily and realized that I have to know more about Women’s football. So I went attended the 2012 Olympics, the 2013 and 2014 Algarve cup and most recently the 2015 World Cup so I could see International Football at its highest level.

We continued to improve and in 2013 we finished 6th in the league, before taking 2nd place in 2014 and qualifying for the European Champions League, the highest level of women’s club soccer. I was a 2013 nominee for Coach of the year, and went one better in 2014 when I won the award.

Having already attended a PSC event, and helped facilitate a number of girls sign in the Swedish leagues, do you see any key differences between women’s players you have seen in the USA and the players you have coached in Sweden?
I think women’s players from the US are often in good physical shape and are great competitors. The tactical shape of football in Europe is a little different, but US players are quick learners, and are usually quick to adapt. And of course, players in both countries can always improve themselves in the technical aspects of soccer.

Following Team USA Women’s World Cup win in the summer, are European clubs actively looking to sign American girls to strengthen their sides now?
Yes! Following the World Cup win a lot of clubs want American players but it is hard for them to find the right players for their sides. It is of course a big, big, benefit to see players live and in person as you can learn so much more than from a video or a resume.

Thinking back to the events you attended last December, what was it about the girls you saw there that impressed you the most?
I was impressed with the standard of the games and the mentality of the players to take on the challenge, for me important to see both players individual and that you are a team player.

We’re pleased to see you are coming back out to PSC events this December, what is it that you look for in a player at these events?
I look for potential professionals for my team that is at the top level in Sweden, so my demands are high! Girls need to deliver the whole package of talent on the field, but also show their character off the field. My last combine was a great experience, and I was very impressed, I am sure this one will be even better

Finally, is there any advice you would offer to girls attending the upcoming events?
My advice is to be yourself and to make sure you are fully prepared mentally and physically. I’m really looking forward to being a part of the combine to witness more good football and good players!

Thanks Rickard, we look forward to welcoming you in Florida this December!

Rickard Nilsson , will be in attendance at both our Women’s combines this December on behalf of his Damallsvenskan side KIF Orebro. Both combines are selling out fast, with some positions already sold out.