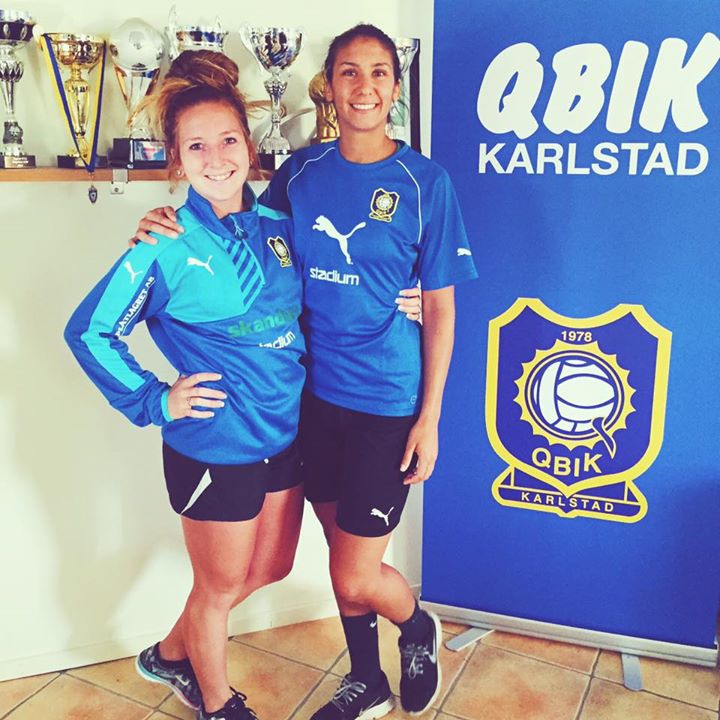 Kimsey was a standout performer during PSC’s inaugural women’s combine last December, and was subsequently offered a trial with Mallbackens IF, before opting to pursue opportunities in the U.S.

Seven months later though, the midfielder was recommended to QBIK by PSC Women’s Director Simon Deeley, having made her mark during the three-day event in Carlsbad, California.

After accepting the challenge and continuing her fine form in Sweden, the signing represents the latest landmark in an already-notable soccer career for the Concordia graduate, after she was named NAIA Player of the Year in 2013.

Asked about achieving her goal of playing professionally in Europe, Kimsey said: “It’s a dream come true. I’ve worked my whole life to play professional soccer and now I’m finally getting to do what I love at the next level.

“I knew I wanted to continue with my soccer career and I had previously heard that combines are a good opportunity to get seen. The PSC staff was amazing; they kept in contact with me every step of the way, they also made sure that I was prepared for the move and felt comfortable and safe.

“PSC were clear about the expectations coming into the trial, they did and amazing job of advocating for me which provided me with a lot of great opportunities.

“The majority of the players at the combine were of high quality and wanted to further their soccer careers, much like I did. All of the coaches were good at giving helpful feedback and I felt like the event went really well.

“I’m really excited to learn a different style of play and broaden my skills set by learning from my teammates and coaches. I’ll recommend PSC to any players looking to further their soccer careers.”

Badalamente, meanwhile, impressed coaches and scouts with a series of excellent displays at PSC’s second San Diego combine earlier this summer, her first event with PSC.

Having filled a void in midfield by inviting Kimsey for a trial, QBIK were made aware of Lauren’s availability after enquiring for an attack-minded full-back, and it was one performance in particular that caught they eye.

After reverting from a midfield role to a defensive position on the final day of the June event, it took the Italian-born midfielder just 20 minutes to convince Agency staff of her abilities. Just eight days later, the club offered her a trial.

The former ACF Torino is a fine example that, with talent and a good attitude, players can realize their dreams of playing pr

ofessional soccer almost overnight, and was delighted to sign her first contract.

“It feels absolutely amazing,” she said. “Having the opportunity to play a high level and doing it in a whole new world full of surprises and new adventures excites me the most. I was also thrilled to hear such good news and to hear it so fast.

“My WPSL team told me about the PSC combine and they inspired me to go for it. I had nothing to lose! I loved the environment and the high work ethic from the girls and coaching/guidance staff.

“The PSC staff was very organized and kept in touch the whole time. They made sure I was prepared and that everything went smoothly. The PSC combines have a very high success rate.

“I would recommend the PSC combine, it’s opened many doors for me in Sweden and I know that it will do the same for others.

Asked what advice she would give other aspiring players, she finished by saying: “If you can imagine it, you can become it. If you can dream it, you can achieve it.”

Both players also took time to thank their families, friends, former coaches and team-mates for helping them reach this special moment.