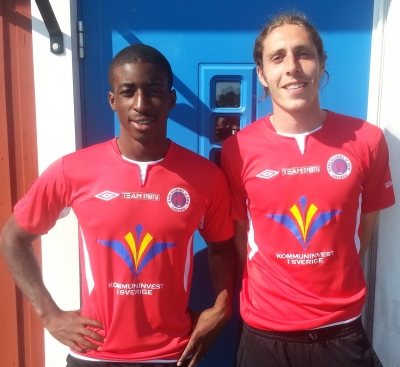 PSC are proud to announce the first success stories of their 2014 residential program held in Orebro, Sweden. Central midfielder Adam Brundle and outside midfielder Tyrell McLeod-Bentley have both signed for Karlslunds IF HFK in the Swedish 2nd Division. The double signing comes after PSC’s residential team defeated Karlslund one nil with Brundle and McLeod Bentley playing pivotal roles.

Karlslund play in the Swedish 2nd Division North in the city of Orebro and play home games at the Karlslund arena which holds 2000.Despite being English, both Brundle, 21 and McLeod-Bentley (also 21), were originally seen by agency staff at PSC’s 2013 Jacksonville, Florida combine in December where they impressed enough to be invited on 2014 Showcase tours to Turkey and Sweden respectively. Both players attracted interest from clubs on tour but no concrete offer materialized. Brundle also returned to Sweden in March when he trialed in Sweden with Superettan side OStersunds FK after being recommended by PSC but was again unfortunate in not securing a contract.

PSC, recognizing the professional potential and talent in each player, quickly invited them to be a part of the 2014 residential program which started July 1st 2014. With the program just 3 weeks old the team are currently unbeaten against professional sides which has led to further interest from European coaches attending games.

It was during the Karlslund Game that both Brundle and McLeod–Bentley gave stand out performances and see’s them each signing their first professional contracts.

Whilst disappointed to lose two strong players from the residential program, PSC Directors are confident there is enough quality left in the dressing room to continue their unbeaten streak and generate more contract offers in Sweden.

Residential Director Tom Taylor commented “This is great news for the program to see two players sign in the first 3 weeks. The boys will be missed but we have a long list of players in both America and England looking to take their places in the team and showcase themselves in Sweden. We wish Adam and Tyrelle the best and we look forward to helping them progress in the professional game”

Karlslund are also delighted with their latest acquisitions “We believe that Adam and Tyrelle was best on the field, when we met the team in a practice match earlier this summer, so we are very pleased to have recruited them to our club” says Karl Lund sporting director Andreas Östby.