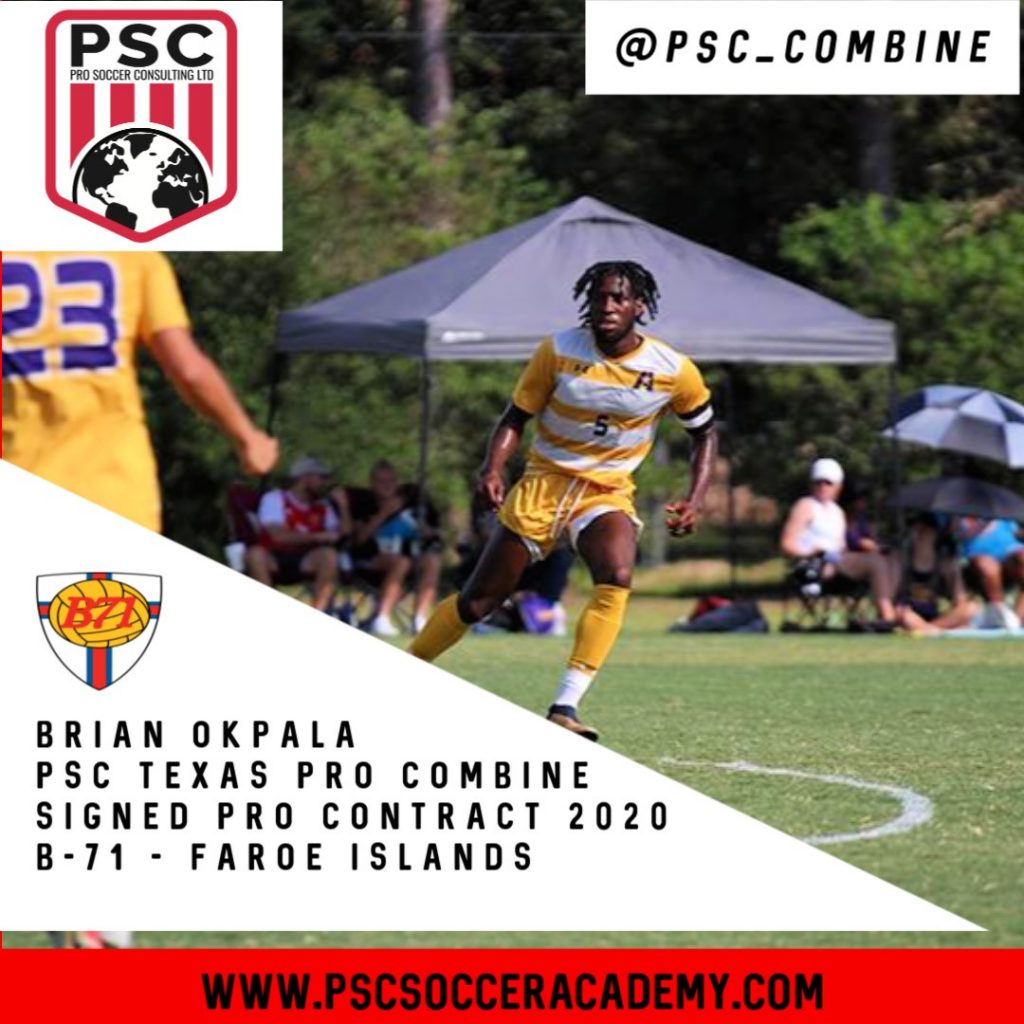 Following his performances at our Texas Pro Soccer Tryout, central defender Brian Okpala has signed with Faroe Islands side Sandoyar Ítróttarfelag B71. Okpala was seen directly by Head Coach Richard Goffe during the three-day tryout who was convinced enough to make a direct contract offer to the Louisiana State University graduate.

Okpala, who turns 25 this year, is no stranger to PSC events having attended one of our Youth ID camps in New York at the age of 17. He stood out during the camp, and showed clear potential to progress in the future, and at the time chose to go the college route.

“I ended up going to college at Louisiana State University at Alexandria, which helped me develop along with the feedback I received from PSC at the ID camp I took into account and decided I wanted an agency who will help me after graduation. I looked no other place than PSC because of the experience I had with them and they did a good job with staying in contact.”

When asked about the event, the first time he had joined up with PSC staff in 7 years, Okpala commented:

“The combine in Houston was an enjoyable experience in a professional environment. The PSC staff made sure everything was organized, guiding you with instructions throughout the event. Both during and after each day as well. They never left you asking questions. They are football oriented, and I learned some valuable stuff from them and the professional coaches in attendance.”

PSC director Simon Deeley added “It is great to see players take on board the feedback they get from our camps all those years ago and come back to us once they are graduate and to be rewarded this way. Brian was a good player at 17 but needed to develop more in order to be considered for the professional level. He took this feedback well and worked on his game which we find very admirable.”

When asked about the talent on offer at the Texas event in general “We have already seen 5 success stories from our more recent events, to add to the many that have come from previous events. We look forward to coming back in the summer!”

The Faroe Islands is situated northwest of Scotland, and about halfway between Norway and Iceland it is a territory of Denmark. The islands have a population of 51,000 people and offer an excellent route for North American players to start their career in Europe. With two professional divisions, a high standard of living, and the top teams qualifying for the UEFA Champions and Europa League, it offers a realistic route and pathway for PSC players to start their journey! PSC wish Brian, Coach Goffe, and Sandoyar Ítróttarfelag B71, the best of luck this season.

PSC will be returning to Houston this August. Please see our upcoming tryout page for more info.