Tori Ornela, 2016 Combine Standout, Reflects On Her Career in Iceland

This year, Ornela hit a career milestone as she was featured and ranked at No. 16 in Everybody Soccer’s “Top 60 USWNT Goalkeepers.” Considering that she moved on from college soccer without knowing where to go afterwards, and then finding guidance through PSC to point her in the right direction, it is safe to say that Ornela’s progression is remarkably inspiring. 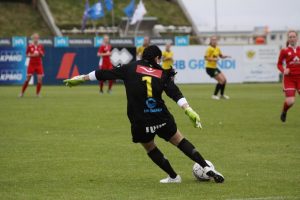 “It gives me hope and motivation that the sacrifices I made throughout the years and the hard work day in and day out is paying off,” Ornela said. “It makes the dream of being a professional soccer player a reality to me, but there is more work to be done. This gives me even more motivation to become a better and stronger player.”

The 27-year-old goalkeeper played soccer at California State University, Bakersfield before making the jump to Europe in 2017. Although she succeeded in signing professionally, Ornela recalled how difficult it was to get noticed by club teams without any kind of professional guidance.

“I don’t think I would have actually landed anywhere,” Ornela said. “Doing it by yourself is a whole different ball game than actually having help and connections, and being connected to people that have those connections helps a lot.”

Ornela was recognized at PSC’s Women’s California Combine in 2016 by Director of Women’s Soccer Simon Deeley, who subsequently recommended her to Premier League side Haukar after an impressive display of goalkeeping abilities. It was shortly after the combine that the team signed her to a one year contract.

“The staff and the coaches at the combine were great,” she said. “They had a lot of insight and helpful tips and then getting to know Simon and everyone at PSC was very helpful. They were easy to communicate with and they made the process a lot simpler than what I thought it was going to be.” 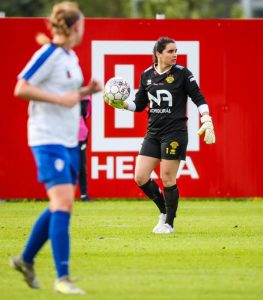 To this day, Ornela still cannot believe that she is living her dream as a professional soccer player and playing in a different country. She hopes to continue making her colleagues proud by inspiring a younger generation to work towards their dreams and aspirations.

“There are definitely moments where it still feels surreal that I can continue this career,” she said. “I want to continue to make the people close to me proud and inspire younger female athletes that they can achieve their dreams in anything they love or want to do.”

PSC Director, Simon Deeley, commented, “Tori has been a dream to work with and a model professional. She has not only done her job on the field, but been respectful of the process off the field, showing both patience, and appreciation, and those are the qualities that will drive her further in her playing days and her career after that. Her success is definitely no accident, it is through desire and design and she is a perfect role model to any soccer players looking to break into the professional game”

Are you looking to begin your footballing career like Tori? Click here for more information on our upcoming tryouts and combines.