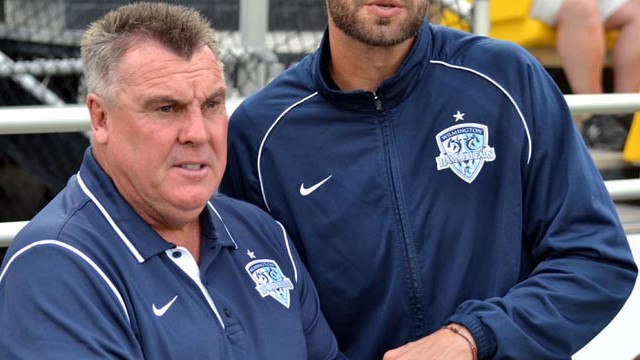 PSC recently got the time to catch up with the newly appointed Head Coach of the Tulsa Roughnecks, David Irving, to talk about his upcoming 2015 season in Oklahoma. Irving’s extensive playing career saw him play with European teams such as Everton, Sheffield United and Shamrock Rovers before crossing the Atlantic to play with the Fort Lauderdale Strikers, Atlanta Chiefs, San Jose Earthquakes and the team he now returns to coach the Tulsa Roughnecks.

Following his successful playing career Irving began forging a managerial career in the United States which recently saw him named into the USL Hall of Fame thanks in part to a successful 16 years in North Carolina with the Wilmington Hammerheads. In this time he claimed the USL title in 2003 and reached the USL Pro Championship Final in 2012 with one of the lowest budgets in the league.

Irving has an excellent proven track record of player recruitment identifying many players at combines such as Luke Mulholland who now plays in the MLS with Real Salt Lake. In the last 3 years Irving has discovered over 20 players from PSC events and will be attending 2014/15 PSC winter combines as he looks to build his roster for the Roughnecks Inaugural season.

We caught up with him following his appointment with the new USL Franchise…..

I’m looking forward to moving back to the area after enjoying my time here as a player. The club and community were great to be a part of in the early 80’s and I’m hoping to build a successful franchise again. Back then we played at Skelly Stadium and think we averaged nearly 20,000 fans per game. Looking at the setup at ONEOK Field and the downtown location then I’m sure we can look to build something special again.

The first season is always something to look forward to – In 2011 I had a similar situation with the Wilmington Hammerheads when they returned to the USL Pro as a new franchise. I don’t have any players signed right now so the next 2 months is going to be an important and busy time to build this club. We are going to look to be competitive and it’s not going to be easy with a lot of new expansion sides coming into our league. It’s going to be a process but I’m sure we will be able to turn out a successful product both on and off the field that Tulsa can be proud of.

“You spent time as a player with the Roughnecks during the NASL era in the 1980’s and the team became very popular and successful during this period. Do you think the new Roughnecks can be as successful as before?”

Certainly. I think soccer has grown so much since that time and Tulsa has the soccer history and people to make this franchise something special. I think if we can get the city behind this team then we can reward them with entertaining performances on the field and successful results.

“You will be attending PSC combines during the winter to look for potential players. As an expansion franchise with currently no players, how vital are these events for you to build your team for the upcoming season?”

It’s a great opportunity for me to see more players from around the country that I would not otherwise have access to and expand my recruiting net. PSC events are especially valuable to me as I have been attending them for the last 3 years as a USL Pro, Head Coach. I know these events attract a high quality of player which is why I have had such success from them in the past. I put a lot of stock into these combines and they’ve proved very worthwhile to me during my time at the Hammerheads and I expect this winter to be no different.

What advice would you give to players attending combines this winter?

Largely just to relax, play their game and not to worry too much about ‘trying to impress’. Three days is more than enough for I and any of the experienced coaches in attendance to pick out the players who may be capable of playing professionally. It’s a good opportunity for me to evaluate and pick out players I like but obviously all coaches have a different opinion on the game so it’s important for players attending to understand this and know coaches will pick what is right for their individual organization. When coming to these events it’s very important to me for players to show a good attitude and mentality towards the game and it’s not always just about your performance on the field but about how you can fit into a team environment.

“What success have you had in the past attending PSC events?”
I look forward to attending PSC Combine’s and seeing what new talent is out there each year. The USL Pro is a competitive league and this is an important tool for me to find potential players for my sides. During the last few years I have signed a number of players from combines and also taken many into trial further. I have been to England, Turkey and across the United States with PSC to find players and they have proved to be an excellent way for me to evaluate players I wouldn’t normally have access to.

“What are you looking forward to most about the 2015 USL Pro season and what are your thoughts on the development of the league with the addition of many new franchises?”

More teams in the league and quality franchises is always good for US soccer, MLS and USL Pro. The more teams and more regional travel for sides like ourselves will only add to the development, competitiveness and structure of the game as a whole over here. The Midwest has a lot of new teams coming into the league such as Ourselves, St Louis and Louisville as well as Oklahoma City who came into the league last year. This will definitely help to create some local rivalries between sides and I for one am looking forward to seeing where the next few years will lead us

Thank you Dave! We look forward to seeing you again at our events this winter.

Coach Irving will be at all four of PSC’s winter combines in Chicago, Ft Lauderdale, San Diego and Las Vegas this December as looks to build an entire squad for his upcoming 2015 USL season.

Other teams currently committed to PSC combines this winter include: