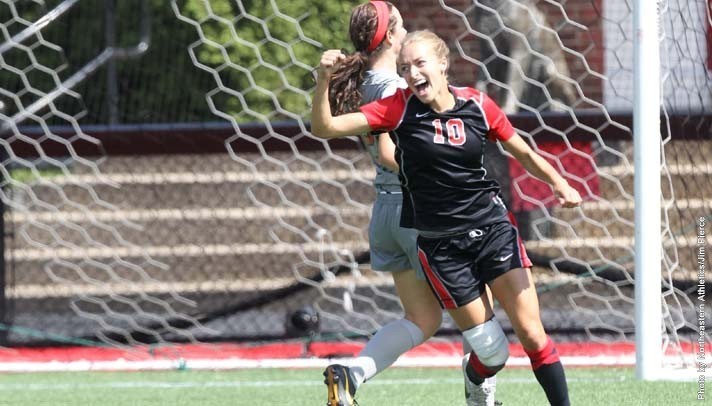 The 25-year-old forward stood out for the various European and American coaches in attendance at the event, and has since realized her goal with the help of PSC.

A Northeastern University graduate, Terry heard about the event through her former college coach, and has spoken of her delight at taking the chance to be seen by a number of professional clubs from around the world.

We took the time to catch up with Hanna recently. Among other things, she recalled the combine itself and provided an insight into what it’s like to sign in Europe.

Check out what she had to say below.

On signing professionally in Europe with QBIK:
I am so excited about heading overseas and getting the opportunity to play in my ‘second home country’. I have dreamt about playing in Sweden since I was a little girl, so I just feel very lucky to have this amazing opportunity with QBIK.

On playing in Sweden…
I am really looking forward to completely immersing myself in the Swedish culture, and obviously being able to see all of my friends and family that I don’t get to see that often. I am probably the most excited about becoming familiar with and learning the Swedish style of play and really growing from it. My brief time with the Swedish U-23 team gave me some insight into the Swedish style, but I am just really excited about growing as a player in this league.

On reasons for attending PSC events…
My old college coach sent me an email about it, and it sounded like a good opportunity to be able to showcase myself. Playing for the last two years with the Thorns, the caliber of players around me was absolutely world class, which also means I didn’t get the exposure and playing time that could guarantee me a contract in Sweden. I thought that if I got the opportunity to showcase myself in front of the coaches and scouts attending the event, I would put myself in a better position to sign a contract overseas.

On the event itself…

I was really impressed with the caliber of players that attended the event. The exposure and coaching we received during the event was awesome. We were with, and around, all of the PSC staff and the attending coaches at all times, and though there were 35 girls, they made sure to get to know each of us individually. The personal attention from all of the coaches and the PSC staff made us feel very confident which obviously helps us showcase ourselves to the best of our abilities.

On the process of signing a contract…
They told us at the beginning of the event that we would be hearing from them and the coaches very soon after we left the combine, but I was surprised just how quickly the turnaround was. Within a week, I had had several very good conversations regarding my future, both with the PSC staff and the coaches attending the event. Having this immediate and consistent communication helped take some of the pressure off of me and let me focus on improving my game and getting fit for my upcoming season.

On PSC…
The PSC staff was incredibly helpful, not only in initiating the interactions with us and any interested coaches, but following it through to the end and making sure that we were completely in the loop. The constant communication and updates were amazing because I could then focus on things like getting ready for the upcoming season. PSC was actually the only combine I had heard of, but my college coach recommended it to me, and trusting her judgement I thought it would be beneficial to check out. I am really glad I did because I would have never even known about or been given these opportunities if I hadn’t gone.

I would recommend any PSC combine or tour to any players who wish to play in Europe. It can be very difficult sometimes as an American player to break into a European league, so having that one-on-one facetime with the attending coaches is amazing. They get to see in person what you can do and your strengths, and I think that nothing really compares to being able to showcase yourself in person.

Hanna’s attitude towards the process has been excellent, and everyone at PSC would like to wish her well, as our staff continues to help her as a professional player.

If you think you have what it takes to play professionally and would like to follow in Hanna’s footsteps, please check out our upcoming combines.