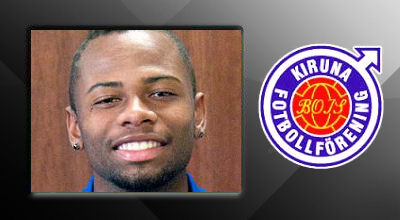 PSC have today confirmed another success story in the North of Sweden as 2015 Sweden Showcase Tour striker Zari Prescod has signed for Kiruna FF in Sweden after impressive performances in front of scouts in January.

The quick, tall striker from Barbados was noticed after his first game in Sweden by Scandinavian Scout Lars Svensson who immediately reached out to his contacts at Kiruna FF and encouraged them to come watch Zari play live.

The Swedish 3rd Division club came out to watch PSC’s 1 nil victory against 2014 Champions Pitea IF, Prescod himself scoring the only goal of the game with an outstanding run from the halfway line (see above). His performance, coupled with Svensson’s recommendation was enough to secure a contract for the former Oral Roberts University forward ahead of the 2015 season.

Prescod’s story started at PSC’s Orlando Combine in January 2015 where his performances, especially on the final day, saw him selected for PSC’s Sweden Showcase just 4 weeks later. He was unable to afford the trip himself but reached out to the Barbados FA who were more than happy to fund one of their young stars in chasing their dream.

The Barbados FA were right to back Zari as he was one of the leading players on the tour and has been rewarded with his first professional contract for the 2015 season. Zari is the second player Kiruna have signed from PSC in the last 12 months after signing Gibson Bardsley last season who went on to score 8 goals in 8 games before returning to the USL Pro.

PSC look forward to watching Zari progress this season and hope to see a similar level or success that Gibson enjoyed last year.